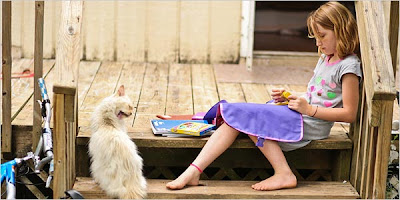 Surge in Homeless Pupils Strains Schools
Her family is facing eviction, but Charity Crowell, 9, and her younger brother are enrolled in elementary school in Asheville, N.C.
By ERIK ECKHOLM
September 5, 2009

ASHEVILLE, N.C. — In the small trailer her family rented over the summer, 9-year-old Charity Crowell picked out the green and purple outfit she would wear on the first day of school. She vowed to try harder and bring her grades back up from the C’s she got last spring — a dismal semester when her parents lost their jobs and car and the family was evicted and migrated through friends’ houses and a motel.

Charity is one child in a national surge of homeless schoolchildren that is driven by relentless unemployment and foreclosures. The rise, to more than one million students without stable housing by last spring, has tested budget-battered school districts as they try to carry out their responsibilities — and the federal mandate — to salvage education for children whose lives are filled with insecurity and turmoil.

The instability can be ruinous to schooling, educators say, adding multiple moves and lost class time to the inherent distress of homelessness. And so in accord with federal law, the Buncombe County district, where Charity attends, provides special bus service to shelters, motels, doubled-up houses, trailer parks and RV campgrounds to help children stay in their familiar schools as the families move about.

Still, Charity said of her last semester, “I couldn’t go to sleep, I was worried about all the stuff,” and she often nodded off in class.

Charity and her brother, Elijah Carrington, 6, were among 239 children from homeless families in her district as of last June, an increase of 80 percent over the year before, with indications this semester that as many or more will be enrolled in the months ahead.

While current national data are not available, the number of schoolchildren in homeless families appears to have risen by 75 percent to 100 percent in many districts over the last two years, according to Barbara Duffield, policy director of the National Association for the Education of Homeless Children and Youth, an advocacy group.

There were 679,000 homeless students reported in 2006-7, a total that surpassed one million by last spring, Ms. Duffield said.

With schools just returning to session, initial reports point to further rises. In San Antonio, for example, the district has enrolled 1,000 homeless students in the first two weeks of school, twice as many as at the same point last year.

“It’s hard enough going to school and growing up, but these kids also have to worry where they’ll be staying that night and whether they’ll eat,” said Bill Murdock, chief executive of Eblen-Kimmel Charities, a private group in Asheville that helps needy families with anything from food baskets and money for utility bills to toiletries and a prom dress.

Since 2001, federal law has required every district to appoint a liaison to the homeless, charged with identifying and aiding families who meet a broad definition of homelessness — doubling up in the homes of relatives or friends or sleeping in motels or RV campgrounds as well as living in cars, shelters or on the streets. A small minority of districts, including Buncombe County, have used federal grants or local money to make the position full time.

The law lays out rights for homeless children, including immediate school placement without proof of residence and a right to stay in the same school as the family is displaced. Providing transportation to the original school is an expensive logistical challenge in a huge district like Buncombe County, covering 700 square miles.

While the law’s goals are widely praised, school superintendents lament that Congress has provided little money, adding to the fiscal woes of districts. “The protections are important, but Congress has passed the cost to state and local taxpayers,” said Bruce Hunter, associate director of the American Association of School Administrators.

Fairfax County, Va., where the number of homeless students climbed from 1,100 in June 2007 to 1,800 last spring, has three social workers dedicated to the homeless and is using a temporary stimulus grant to assign a full-time transportation coordinator to commandeer buses, issue gas cards and sometimes call taxis to get the children to their original schools.

Like Fairfax County, the Asheville area looks prosperous, drawing tourists and retirees, but manicured lawns, million-dollar homes and golf courses mask the struggles of many adults working at low-paying jobs in sales and food service.

Emily Walters, the liaison to the homeless for the Buncombe County schools, is busy as school begins, providing backpacks and other supplies and signing children up for free breakfasts and lunches. But her job continues through the school year as other families lose their footing and those who had concealed their status, because of the stigma or because they were not aware of the benefits, join the list.

Sometimes it includes driving families in crisis to look at prospective shelters — a temporary solution at best, Ms. Walters said. When the county receives a two-year stimulus grant next month, she said, she hopes there will be more money to help people avoid eviction or pay security deposits for new rentals.

The evening before school began, Ms. Walters drove 45 minutes to an RV campground to deliver a scientific calculator and other essential school supplies to Cody Curry, 14, who lives with his mother, Dawn, and his brother, Zack, 11, in a camper. Mrs. Curry had to downsize from a trailer, she said, when her work as a sales clerk was cut to two days a week.

The first day of school, Ms. Walters drove to a men’s rescue shelter in the city to take Nate Fountain, 18, to high school. Nate said his parents kicked him out of the house last spring, during his senior year, because he was not doing his school work and was drinking and using drugs. With Ms. Walters’s help, he said, he expects to finish high school this semester and study culinary arts at a community college.

“I spend a lot of time just making sure the kids stay in school,” Ms. Walters said.

The busing service was especially valued by Leslie Laws, who was laid off from her job in customer service last year and lost her rental apartment.

Ms. Laws and her 12-year-old son are staying in a women’s shelter in Asheville, far from his former school. He is deeply involved with activities like chorus. Now he must catch the bus at 6:05 a.m. and ride one and a half hours each way.

Educators and advocates for the homeless across the country said that in the current recession, the law had made a difference, minimizing destructive gaps in schooling and linking schools with social welfare agencies.

Charity Crowell, despite her vow to bring up her grades, may be in store for another rough semester. Her stepfather works long hours delivering food on commission, but business is poor. Her mother, Katrina, wants to look for a job, but that is difficult without a car.

Food stamps help, but by the second half of each month the family is mostly eating “Beanee Weenees and noodles,” Ms. Crowell said. As school resumed in late August, the family was facing eviction from the $475-a-month trailer and uncertain about what to do next.

A version of this article appeared in print on September 6, 2009, on page A1 of the New York edition.
Posted by Robalini at Friday, September 25, 2009

Email ThisBlogThis!Share to TwitterShare to FacebookShare to Pinterest
Labels: Homeless