'Aliens will eat the fatties first' 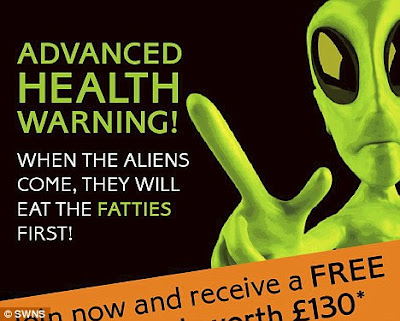 An advert for one of Britain’s biggest gyms has sparked outrage by declaring: ‘When the aliens come, they will eat the fatties first.’

The campaign, featuring a little green man, was meant to encourage people to join up and shed pounds put on over Christmas.

But instead slimmers have branded the ad in offensive and weight loss experts said the ‘negative message’ is more likely to drive people away.

'Offensive': The ad for Cadbury Gym, Bristol, was intended to encourage slimmers

Signs put up near the health club and spa at Cadbury House Hotel in Congresbury, Bristol, read: ‘Advance health warning! When the aliens come, they will eat the fatties first.’

However, mother-of-two Vicky Palmer, who suffered from an eating disorder as a teenager, believes the sign should be removed immediately.

Mrs Palmer, 45, of Churchill, Somerset, said: ‘I would like to think that their hotline is very “hot” with people phoning to complain about this degrading and offensive advertising.

‘I am not overweight yet I still find this extremely offensive and patronising but how much more so to someone genuinely overweight?

‘People who have a weight problem may also suffer with low self esteem and this advert is not going to help them in any way.

‘The people who came up with this idea and sanctioned the advert need a good, stiff kick up the backside, and if that backside is a rather bony one, then they will feel this all the more.’

The health club and spa is attached to the 72-bedroom Cadbury House Hotel, which is part of the prestigious Hilton Doubletree chain.

However, the centre, which boasts two gym studios, a spa, salon, bistro and won European Club of the Year in 2007, is managed separately to the hotel.

The club, which is one of the largest independent health clubs in the UK, has two purpose-built studios along with a spa, salon and bistro.

It employs a team of personal trainers and offers more than 100 fitness classes each week.

Health club bosses claim they launched their advertising campaign last week in an attempt to persuade people to shape up after Christmas.

But a spokesman for the Beat Eating Disorders association believes the ‘negative message’ will not work on potential customers.

He said: ‘This is a very unfortunate choice of words. People get fit and healthy when they are positively motivated and are unlikely to respond to such a negative message.

‘Perhaps the gym should reconsider their approach.’

Local resident Alison Winter added: ‘I am shocked and disgusted that they feel they have the right to blatantly discriminate like this.’

But club manager Jason Eaton defended his campaign as a ‘fun’ way to approach the subject of obesity.

He said: ‘The alien campaign has been developed as a tongue in cheek look at the fact that people generally, over the Christmas period, do put on a little weight.

‘Our view is that people should not feel stigmatised by the use of the word “fatties” as it encompasses everyone who might have over-indulged during the holidays and now wants to do something about it.

‘At the club we are doing all we can to combat the problems of obesity and our advertising has to get the message over in a forthright but fun way.

‘We do not intend to cause any offence to anyone.’
Posted by Robalini at Tuesday, January 12, 2010

Email ThisBlogThis!Share to TwitterShare to FacebookShare to Pinterest
Labels: Aliens

I don't think the ad should be taken offensively coz obesity is prevalent problem. I understand that some people have hormonal imbalances but I also strongly feel that a lot of people who are obese fail to discipline themselves and let food get the better of them. Instead of shoving the issue under the carpet, they should confront it and make some major lifestyle changes so that they can become healthy.