Oops, that was a bad call, Earth 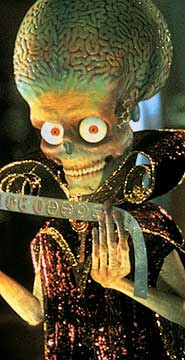 The Sunday Times
January 24, 2010
Oops, that was a bad call, Earth
Some scientists want to send signals into space in search of aliens but others warn we may get more than we bargained for
Richard Woods and Chris Hastings

“CALLING all aliens, this is Earth. Are you receiving me?”
Rather than simply listening for signals of extra-terrestrial life, some scientists are preparing to take a much more active approach to finding alien intelligence on other planets.

They believe we should start beaming regular signals into space specifically to find intelligent life, even though other scientists believe it could be an invitation to danger.

“My personal view is that being more active is a worthy strategy,” said Douglas Vakoch, director of interstellar message composition at the SETI [search for extraterrestrial intelligence] Institute in California. “There is more serious talk of it, though not at the institute level.”

At an astrobiology conference in Texas in April, SETI enthusiasts will discuss new methods of discovering extraterrestrial life, including sending out interstellar messages. Alexander Zaitsev, a Russian scientist who has already beamed out four carefully composed signals to nearby stars, has been invited to attend.

In the UK, Dr Marek Kukula, public astronomer at the Royal Observatory in Greenwich, said: “Part of me is with the enthusiasts and I would like us to try to make proactive contact with a wiser, more peaceful civilisation.”

However, he warns that advertising our presence could be risky. “We might like to assume that if there is intelligent life out there it is wise and benevolent,” he said. “But of course we have no evidence for this.

“Given that the consequences of contact may not be what we initially hoped for, then we need governments and the UN to get involved in any discussions.”

The issue will be among those raised at a two-day meeting at the Royal Society in London this week, under the heading, “The detection of extraterrestrial life and the consequences for science and society”.

Among the speakers will be Professor Simon Conway Morris, a Cambridge University evolutionary biologist, who says there is good reason to think aliens exist — and that they may well have chemical and biological similarities to us.

Conway Morris, whose talk is entitled “Predicting what extraterrestrial life will be like — and preparing for the worst”, said: “My basic argument is that, contrary to most neo-Darwinian thinking at the moment, evolution is much more predictable than people think.

“In particular, I would argue that the emergence, by evolution, of intelligence, cognitive capacity and all that stuff is an inevitability.”

In short, under the right conditions of a “biosphere” such as that present on Earth, the molecules necessary to form complex and intelligent life are already available; Darwinian evolution will do the rest.

“I think we can argue some intelligence must emerge in a biosphere,” said Conway Morris. “If that is correct — and it applies to manipulative skill — then that suggests there should be alien technologies.”

Astronomers have already discovered about 300 planets beyond our solar system, and some suggest it is only a matter of time before more Earth-like planets are identified.

That suggests there should be “lots of extraterrestrial civilisations around. At least that’s the principle, but where are they?”, says Conway Morris. Why have aliens not popped up — except in Hollywood films such as ET and Independence Day — despite decades of eavesdropping with radio telescopes?

The astronomer Heather Couper said: “My main worry is that our technology is simply not up to the task. Earth came into existence four to five billion years ago, but the oldest stars are twice that age. They may have life, but that life may be far more advanced than we are.”

Others suggest aliens may have good reason not to give away their presence. Weak electromagnetic signals have been transmitted from Earth for nearly a century in the form of radio, television and other transmissions. By now some should have travelled 100 light years out into space, though they will be growing fainter and fainter.

If aliens have picked up footage of, say, Bernard Manning or Simon Cowell, let alone the Second World War, they may have decided to keep quiet. “They may be very like us,” said Conway Morris. “I’m not sure I’d answer the telephone.”

However, the most likely explanation, he admits, is that there simply are no alien civilisations out there, perhaps because planets with biospheres are very rare.

Dr Robert Massey of the Royal Astronomical Society, takes a similar view: “If there were thousands of civilisations out there, I think we would have detected something by now. But that doesn’t mean we shouldn’t try.”
Posted by Robalini at Friday, January 29, 2010