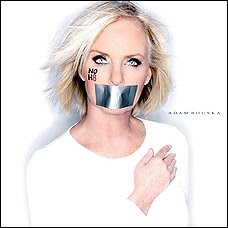 Mrs. McCain appears with silver duct tape across her mouth and "NOH8" written on one cheek in a photo posted Wednesday to the Web site of NOH8, a gay rights group opposed to Proposition 8. The ballot measure passed by California voters in 2008 bans same-sex marriage.

The McCains' daughter Meghan, who has been outspoken in her support for gay rights, has also endorsed NOH8. She appears with silver duct tape across her mouth and "NOH8" on a cheek in a photo on her Twitter site.

Cindy McCain contacted NOH8 and offered to pose for the photo endorsement, the Web site said.

John McCain's office said in a statement that the Arizona senator respects the views of members of his family but remains opposed to gay marriage.

"Sen. McCain believes the sanctity of marriage is only defined as between one man and one woman," the statement said.

John McCain backed an Arizona ballot measure passed by voters in 2008 that defined marriage as between one man and one woman.

The NOH8 Web site praised Cindy McCain's willingness to publicly endorse a cause that is unpopular within the Republican Party.

"The McCains are one of the most well-known Republican families in recent history, and for Mrs. McCain to have reached out to us to offer her support truly means a lot," the site says.

"Although we had worked with Meghan McCain before and were aware of her own position, we'd never really thought the cause might be something her mother would get behind. We have a huge amount of respect for both of these women for being brave enough to make it known they support equal marriage rights for all Americans."

Meghan McCain said Wednesday in a Twitter message linked to her blog: "I couldn't be more proud of my mother for posing for the NOH8 campaign. I think more Republicans need to start taking a stand for equality."

Meghan McCain was asked to be the keynote speaker at next month's National Equality Week at George Washington University in Washington for her advocacy, but her appearance has drawn criticism from Republicans on campus, the NOH8 site said.

McCain's Senate re-election campaign said Wednesday that his presidential running mate, former Alaska Gov. Sarah Palin, will come to Arizona to campaign for him in March. Palin has been a vocal opponent of gay marriage.
---
On the Net: