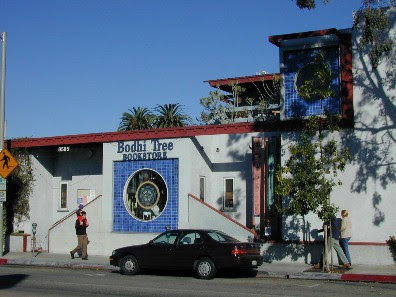 Bad news for Buddhists and others seeking enlightenment: the Bodhi Tree Bookstore is closing. Owners Phil Thompson and Stan Madson informed their staff last Wednesday that the cozy Melrose Avenue shop, a nationally renowned and much beloved spiritual center, will be shutting its doors in a year's time.

After some eight months of discussion, Thompson and Madson decided to sell the property to a local business owner who leases space to several other nearby retailers. The Bodhi Tree opened in 1970. Land values in the area have risen dramatically since then. Meanwhile, the business of selling print books has been on a steady decline. For years, real estate agents had been circling the Bodhi Tree like vultures. In the end, selling the property became a much more profitable option than continuing to sell books.

Thompson and Madson started the bookstore when they were in their 30's. They are now both in their early 70's. They were aerospace engineers who left a life of science for one of contemplation and meditation.

"Twenty years ago we felt like it was an expanding situation," says Madson. "We were concerned the store was getting too big. We had a staff of 100. Publishing was expanding. Spirituality was expanding. But what changed was that the market became widely dispersed."

Books on Wicca and Astrology and Native American shamanism used to be tough to find. But now every Borders and Barnes & Noble carries a significant selection of religious, spiritual and New Age literature. And what can't be bought at a bricks and mortar shop can undoubtedly be found online at Amazon. For cheap.

For the Bodhi Tree, the question of how much to grow became one of how long to hold on. Thompson and Madson built most of the wood shelves and fixtures in the store themselves. The floors creak. The walls are permeated with the smell of incense. Two chubby bookstore cats roam the aisles and pause to be petted by customers who call each kitty by name.

Thompson likes to think that the place has helped people who were lost, who were trying to discover who they really are, whether that be through Buddhism, Taoism, Judaism, Christianity, or Islam. They both worry about what will happen to the community once the store is gone. Where will people go for spiritual solace?

"Perhaps a wealthy philosopher entrepreneur will come in to buy the store and keep it going," says Thompson. "A sort of philosopher king. Or queen."

In the absence of a deus ex machina, however, the Bodhi Tree's fate seems sealed. "We thought we had more time," says Madson.
Posted by Robalini at Monday, January 18, 2010

Oh no, this is so very sad!!! I didn't even know about this until you posted it... thanks, Robbie.