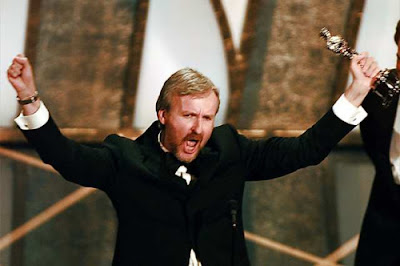 Self-proclaimed "king of the world" director James Cameron has just upstaged himself.

The filmmaker's sci-fi fantasy epic "Avatar" has surpassed his own 1997 record-setting disaster movie "Titanic" to become the highest-grossing movie ever, not accounting for ticket price inflation, foreign currency fluctuations and surcharges on 3-D screens.

Through Monday, "Avatar" racked up $1.85 billion in worldwide ticket sales, edging past "Titanic's" $1.84 billion -- a feat it achieved in less than 40 days, according to the film's distributor, 20th Century Fox.

However, "Titanic" still rules the universe in terms of how many people went to see it compared to the number that have lined up for "Avatar."

As Bruce Nash estimates on his box office site the-numbers.com, domestic ticket sales for "Avatar" would have to reach $925 million in today's dollars to match, on an inflation-adjusted basis, the box office that "Titanic" achieved in 1997. Given the current estimated average ticket prices of $7.46, "Avatar" still needs to sell about 50 million more tickets before it matches the inflation-adjusted domestic gross of "Titanic."

While it may be a long shot that "Avatar" would ever reach that milestone, the film continues to have strong "legs," which in Hollywood parlance means staying power. Its weekend-to-weekend box office declines have been minimal compared with that of a typical movie.

In its sixth weekend, the movie dropped only 18% domestically and 16% internationally, according to Fox.

"Avatar" is still playing on 16,000 screens worldwide, with 72% of its ticket sales coming from 3-D screens.

We're now waiting to hear what Cameron will say at the Oscars on March 7 if he and "Avatar" take top honors. How about "I'm lord of the universe"?