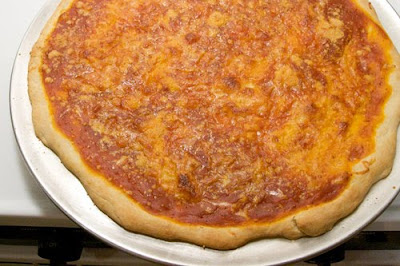 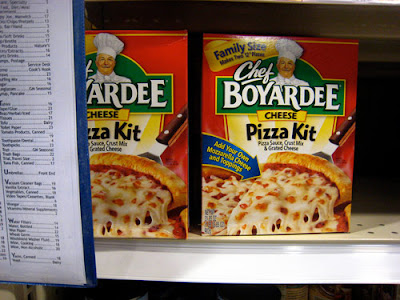 "I remember making the Chef-BOY-AR DEE pizza as a kid (from the box). I believe they still sell it. Has anyone made it recently?" —DC8702, in a comment from yesterday

DC8702: You're right. The Chef Boyardee Pizza Kit is still available in stores. And to answer your question, I myself have made it somewhat recently.*

I've probably told the story on this site plenty of times, so if you've heard it, bear with me. Before my dad opened our short-lived family pizzeria (Mama Mia's), he used to make pizza from scratch quite a bit—trying to perfect recipes. After the pizzeria closed, I don't know if he had had his fill of pizza or what — maybe it was that he could now take some shortcuts — but he started buying these pizza kits.

We'd make them on Friday nights or on a whim during the week for a snack.

And you know what? They were pretty good.

What came in the kit back then (1984 for me) — crust mix, sauce, and a mixture of Parmesan — comes in the kit these days. And something about that bare-bones set-up was perfect.

When I made it recently, I thought there was a lot more sauce than when I was little, but then I remembered that we'd only use a portion of the can and save the rest for another use. (My sister would assemble pizza bagels with it.) Still, I used the recommended amount, which turned out to be way too much (as you might be able to tell from the photo above). I've always enjoyed these with just a thin layer of sauce and a lot of the Parmesan that comes with it.

My family used to add mozzarella and toppings to ours, but we'd often make one of them plain, as-is. I'd almost suggest trying to use a really good Parmigiano-Reggiano, but, then, what's the point of cooking with Chef B?

I'll have to try this again and take better photos and notes. It's been a while and I could use another trip down memory lane.