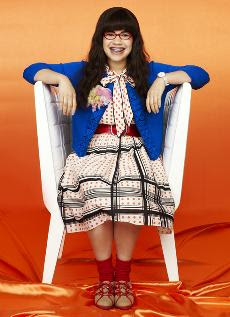 ABC is canceling Ugly Betty, the show that made America Ferrera a star when it arrived in 2006. The series will wrap after the current fourth season, which will end with a 20th episode due in mid-April, reports USA TODAY's Gary Levin.

The show started strong on Thursdays but has lately posted anemic ratings and was hurt by a move to Fridays last fall. The show will continue to air Wednesdays at 10 ET/PT for the time being, where ratings haven't improved much.

"We've mutually come to the difficult decision to make this Ugly Betty's final season, and are announcing now as we want to allow the show ample time to write a satisfying conclusion," says ABC chief Steve McPherson in a statement. "We are extremely proud of this groundbreaking series, and felt it was important to give the fans a proper farewell."
Posted by Robalini at Saturday, January 30, 2010

And seriously, sometimes network execs need to realize that a show can be COMPLETELY CONTAINED within 1 season... trying to drag it out any longer than that can often ruin the show.

But let's face it, network execs are some of the laziest sloths on the planet... they will milk milk from a dead rat if they think it will help them make more money.