Even years after his death, we're still talking about the King of Rock 'n' Roll and his influence across the world. And he's had quite a unique influence on comic books in particular (and not just in those biographical comics, folks). Here's a list of stories made magical thanks to a certain singer with blue-suede shoes.

Marvel used to have various comics under the 2099 label, exploring what the Marvel Universe would look like in the late 21st century. We learned that corporations ruled the U.S., modern superheroes were considered myths, and Thor had inspired the "Thorite" religion. Then, in "Fantastic Four 2099" #2, we met another religious group, the Elvineglicans, people who worshipped the King and patiently awaited the day he would return to rock again. 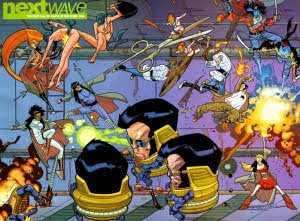 In the series "Nextwave: Agents of H.A.T.E.", writer Warren Ellis gave us a wild and wacky superhero team intended to be distillation of the genre itself. Rather than exploring philosophical issues, politics and character drama as he has in his other works such as "Transmetropolitan" and "Planetary," Ellis decided this comic would focus on "people getting kicked and then exploding."

So, perhaps readers shouldn't have been so surprised when, in issue #11, the team fought evil E.L.V.I.S. drones, which were basically a new take on the villain M.O.D.O.K. that looked like Elvis. Look at this panel, folks. Giant-headed Elvises (or "Elvii") with creepy sunglasses, hovering around on floating chairs armed to the teeth? That WOULD be scary! 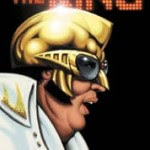 "The King" was a Top Shelf graphic novel by Rich Koslowski. A strange off-beat tale, it explored an Elvis impersonator who began to take the world by storm, touching so many people with his music that many began to wonder if he was perhaps the genuine article himself.

This leads to a journalist's quest to discover the true identity of the King and just why he (and the original Elvis) seems to resonate with so many people. 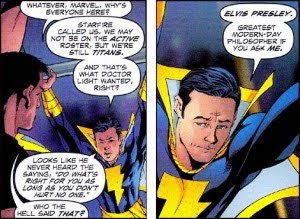 A famous bit of Elvis trivia is how comics influenced him rather than vice versa. Elvis loved Freddy Freeman AKA Captain Marvel, Jr. (nowadays called Shazam) and eventually got himself a costume directly inspired by the young hero's lightning bolt-decorated blue threads and snazzy cape. In recognition of this, different comic writers have returned the love in different ways. In the epic "Kingdom Come" mini-series, an older Captain Marvel, Jr. sported a very Elvis-esque haircut.

And in "Teen Titans" #23, Captain Marvel, Jr. quoted Elvis at one point, remarking that he considered the King of Rock 'n' Roll to be the "greatest modern-day philosopher." If only he had been around to read that. 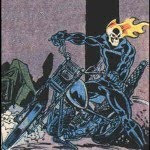 The original Ghost Rider of Marvel Comics was a Western hero dressed in white from head to toe who used tricks to convince people he was a ghost. He was later named Night Rider and then Phantom Rider. But the second Ghost Rider, the flaming-skull demon we all know and love, had a creation that was influenced, at least in part, by Elvis.

After discussing the creation of a motorcycle riding Daredevil villain who would be called Ghost Rider, Roy Thomas decided this character would work better as a dark hero in his own comic. According to Roy Thomas, when he sat down with artist Mike Ploog to design the character, he suggested that the fiery-headed demon wear something akin to Elvis' jumpsuit from his 1968 Comeback Special.

And so, a new, leather-wearing anti-hero was born, a spirit of vengeance who was later portrayed on the silver screen by another big Elvis fan, Nicolas Cage. 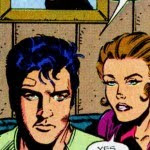 The Marvel Comics multiverse is composed of many alternate realities existing side-by-side. Many of these realities were explored in the series "What If ...?", narrated by the cosmic being Uatu the Watcher. And Uatu definitely noticed Elvis's strange influence on certain events. In issue #10, he gave us a glimpse of a world where the Thing attempted a career as an Elvis impersonator.

But that doesn't beat the wackiness that ensued in "What If ...?" issue #34, where we saw a universe in which the villain Thanos, using the all-powerful Infinity Gauntlet, transformed the planet-eating Galactus into an amnesiac human being with Elvis Presley's face and voice. Believing that he was the King, alive and well, Galactus "relaunched" his music career, taking the world by storm.

Even after he learned the truth of his existence, he decided to remain a human being, having found his true calling. Yet despite his success, he was tormented by his never-ending hunger ... a hunger only quenched by peanut butter and banana sandwiches. 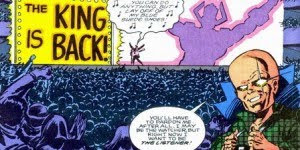