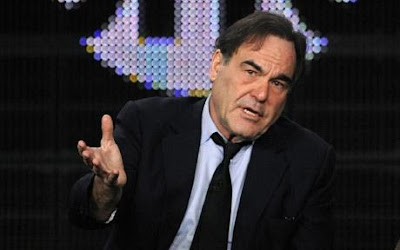 Oliver Stone suggests Hitler is 'easy scapegoat'
Oliver Stone, the controversial film director, is facing another backlash after suggesting that Hitler was made an "easy scapegoat" by history.
By Nick Allen in Los Angeles
10 Jan 2010

Stone, who has previously been accused of promoting conspiracy theories and glorifying violence in his films, has made a new documentary series which he says will place historical figures including Hitler and Stalin "in context".

In the trailer for "The Secret History of America" the director says: "You cannot approach history unless you have empathy for the person you may hate."

He told a press conference at the Television Critics Association in California that "we can't judge people as only 'bad' or 'good'".

"Hitler is an easy scapegoat throughout history and it's been used cheaply. He's the product of a series of actions. It's cause and effect," he said.

The director claimed many people in America did not understand the connection between the First World War and the Second World War and said his intention was to broaden minds, delving into the funding of the Nazi party and how American corporations were involved in it.

Stone said he did not want to make an "easy" history programme and talked about trying to understand people he despises. His series will aim to uncover little reported facts that shaped the modern United States.

Professor Peter Kuznick, the lead writer on the series, said the programme would not portray Hitler in a more positive light, but would describe him as a historical phenomenon rather than "somebody who appeared out of nowhere".

Stone has courted controversy before, most notably in his film JFK which suggested a high level conspiracy to assassinate President Kennedy.

He has also polarised opinion with controversial films about President George W Bush, and Fidel Castro, the former Cuban leader.

Stone said his latest series would show history from an internationalist, rather than an American, point of view. That included a "complete other story" about how Stalin had fought against the German war machine more than anyone.

The director said he fully expected to face a backlash from conservative pundits.

He said: "Obviously, Rush Limbaugh is not going to like this history and, as usual, we're going to get those kind of ignorant attacks." Stone, 63, who won Oscars for directing Platoon and Born on the Fourth of July, also won a Purple Heart for his own military service in Vietnam.