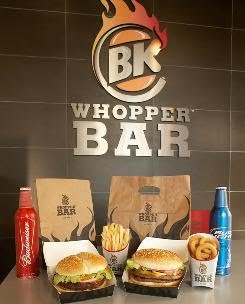 Gimme a Whopper, fries — and a beer.

Those words are no longer wishful thinking. Friday, Burger King (BKC) will unveil plans to sell beer and burgers at a Whopper Bar — a new BK concept to compete with casual dining restaurants — in Miami Beach's tourist-heavy South Beach. The South Beach Whopper Bar is scheduled to open in mid-February.

Don't look for beer at conventional Burger Kings. That's not in the plans. But more Whopper Bars — which offer an assortment of burgers, toppings and beer — could be on tap in tourist hot spots such as New York, Los Angeles and Las Vegas, says Chuck Fallon, president of Burger King North America.

A brewski at the new Whopper Bar — served in special aluminum bottles to keep them extra cold — fetches $4.25. Or, order beer as part of a Whopper combo and your bill will be $7.99 — roughly $2 more than the same combo meal with a fountain drink.

By trying to wedge into the fast-casual dining arena with Whopper Bar, Burger King is chasing the 30-and-under crowd, which is the industry's future growth, says Bradford Hudson, marketing professor at Boston University. But the move is very tricky, he says, because "Burger King means fast food."

But Linda Lipsky, a restaurant consultant, says the move makes sense. "The Burger King customer is aging, so they're just trying to grow up with the customer."

But Lipsky says the chain will be challenged to train staff to legally sell and serve alcohol. "You can be an easy mark if you're not used to selling alcohol," she says.

Burger Kings in Germany and Whopper Bars in Singapore and Venezuela sell beer. But this will be the first BK brand in the USA to sell beer. (A Whopper Bar in Universal City does not sell beer.) "We're in the midst of understanding how much beer will be a part of the (sales pitch)," Fallon says.

The restaurant also will offer delivery of all items — except beer.
Posted by Robalini at Tuesday, January 26, 2010

Affiliate Marketing is a performance based sales technique used by companies to expand their reach into the internet at low costs. This commission based program allows affiliate marketers to place ads on their websites or other advertising efforts such as email distribution in exchange for payment of a small commission when a sale results.