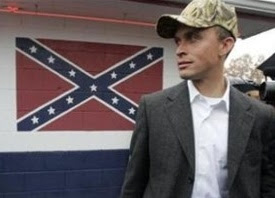 Harold Ford has been accused of flip flopping on issues like abortion and gay marriage as he is apparently planning to mount a primary challenge to Democratic Sen. Kirsten Gillibrand in New York. Stephen Colbert expressed his admiration for Ford's wavering positions by awarding him "Alpha Dog of the Week" Monday.

The former congressman from Tennessee has tried to shed the charge of carpetbagger but Colbert applauded Ford's "massive carpet bags." Ford could have tried to ingratiate himself to the locals but when asked if he had been to Staten Island, he proudly said, "I landed there in the helicopter, so I can say yes."

"You see," explained Colbert. "Ford wants to represent all the people of New York, who, to him, all look like tiny, tiny ants."

The Comedy Central comedian went on to praise the the audacity of Ford for changing his position on issues important to New York Democrats. "I gotta give Ford credit for having the musky sack to change not only his address but also his political views," said Colbert.

Four years ago, Ford told then-Fox host Alan Colmes, "I was not pro-choice at one time."

Just last week, the former congressman seemed to contradict himself when he said, "I am personally pro-choice & legislatively pro-choice."

"He believes that every American has the right to choose when it is politically expedient to be pro-life," explained Colbert.

Only last Monday Ford told Matt Lauer that he was in favor of "civil unions and same-sex marriage."

"But what really puts Ford ahead of the butt-sniffing chain is that he's not pulling this reversal in Clustermunch, Iowa," explained Colbert. "He's doing this in New York City: the media capitol of the world" where all the bits of video tape are saved and "there are whole newspaper pages dedicated to everything famous people do."

"So, for lifting your leg on New Yorkers and telling us it's just and egg cream, you sir, are my Alpha Dog of the Week," exclaimed Colbert.
Posted by Robalini at Friday, January 29, 2010