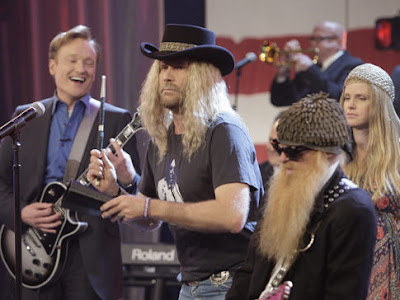 We saw him stand up to his bosses and win - sort of.

We also saw the guy be funny in ways he wasn't for most of the seven months he hosted "The Tonight Show."

Now that he's free from NBC, he's got to use that same intestinal fortitude - and comic genius - to create his next opportunity.

Armed with a load of cash, and the benefit of time, O'Brien needs to get back to what made him desirable in the first place - edgy comedy targeted at a younger audience.

Not the kind of stuff he did for most of his seven-month run on "Tonight," but what he did for nearly 17 years on NBC's "Late Night."

O'Brien was different at 11:35 p.m. than he was an hour later, and that's a downside to broadcast TV.

"That's the problem you always face," says analyst Bill Carroll of the Katz Media Group. "We want you for who you are and now we make you who we want you to be."

Reaching a mass audience means softening the edges, a bit, which O'Brien did.

"Every comedian dreams of hosting the 'Tonight Show' and, for seven months, I got to," O'Brien said near the end of his last show Friday night. "I did it my way, with people I love, and I do not regret a second."

Viewers, however, may argue that what they saw was somehow different, at least up until the end, when all bets were off - and O'Brien's ratings soared.

The bear was a huge hit with O'Brien's "Late Night" crowd, yet, wasn't used on "Tonight" for the first time until Wednesday, when, frankly, it was too late.

The point is that while he's losing the bear in the $45 million divorce with NBC, O'Brien has a chance to get something bigger back - his sense of humor.

"The networks never really counter-program in late-night," Brad Adgate, a senior vice president at Horizon Media said of O'Brien's options now that he left NBC. "I would offer his 'Late Show' [the next time]. To do something that's exactly what Leno and Letterman are offering, I don't know if that's what viewers want."

Fox officials have said they're interested in O'Brien. And Fox, no doubt, can provide marketing muscle and reach. Anyone doubting that should look at the way Fox promotes "American Idol" to the point that you half-expect Simon Cowell to anchor the news alongside Ernie Anastos.

Going the broadcast route might provide the most money, and audience reach, but that could be a mistake.

O'Brien would be better off going to a cable network where he could push the boundaries of content and further unleash his creative spirit in ways broadcast networks could never provide.

O'Brien appropriately ended his last "Tonight Show" with an all-star rendition of "Freebird," a song that includes the line, "Cause I'm as free as a bird now, and this bird you cannot change."

He had changed on "Tonight." And, in many ways, though he was leaving, in the end it was good to see an old friend emerge in O'Brien - the same one we'd like to see back in the fall.

I thought Conan got a raw deal, but the Late Show was definitely a much better show. They really restricted a lot of his skits, and eventually that freedom cost him in the ratings and his job.

Genial fill someone in on and this post helped me alot in my college assignement. Thanks you seeking your information.

Opulently I acquiesce in but I think the post should acquire more info then it has.

I believe conan hobrian is kick ass!!! butt i found my self watching leno and switching back from that british guy and that otha person....... (that I had to look up, that did that sorry bass movie "Taxi", to find and read his name off of the cover) Jimmy Fallon and if im not too busy trying to see whats carson is talking about. also around that time i try to figure out if that dude with gaps in his teeth was on that night or if he is only on-on fridays ? ..... hell o hell aka hahaha!

I do believe something big something ratings/new direction/modern/next generation prob 1994-95ish being thought out right now and need new (talent?)...
retirement...close around the next fad bla bla what ever {Boulderd} I is!!!

Has anyone purchased Conan O'Brien Tickets from the website http://conan-obrien-tickets.doitbigtickets.com/