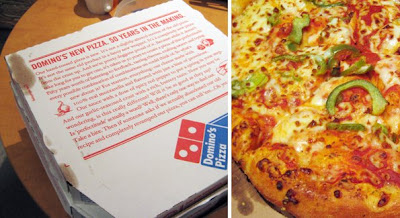 If history and the below video are any indication, it seems Domino’s Pizza spent the last year or so repackaging ingredients it already had into other pizza-ish menu items: oven-baked sandwiches drenched in cheese, bread-bowl pasta to feed depression and/or other negative feelings, the ooziest chocolate lava cake ever, and… chicken. Then some people at the company discovered Twitter, and didn’t like what they saw. Words like “crust seemed a bit lacking,” “boring,” “processed cheese,” and “#” were highlighted on many an office computer, and the execs were forced to remember that Domino’s Pizza is actually a pizza company. And its pizza blew. So they gathered its chefs in well-lit kitchens and got to work changing its recipe:

Yes, after being apparently personally offended by comments about the pizza’s cardboard crust, the company has completely reinvented its pie. As it says right there on the new Domino’s pizza boxes, that reinvention was “from the crust up… [it] takes 50 years to create a pizza of this perfectitude… is perfectitude actually a word?” According to the new pizza’s website (pizzaturnaround.com, headlined “Oh Yes We Did”), they went through 50 different spice combinations, 15 sauces, and “dozens” of cheese blends—to the surprise of no one, they settled on mostly mozzarella—before winding up with their new pie. They’ve been pushing it hardcore with a cheapo deal: $5.95 for a two-topping medium if you buy two. That was too good a deal to pass up, so The A.V. Club ordered four medium pizzas (cheese, pepperoni, green pepper, mushroom), at a staggeringly cheap total price of $28, to see what all the fuss was about.

The taste: It’s worth noting first that the turnaround pizza looks a lot like the old pie, but “glistening-er”—the poor man’s “perfectitude.” The colors on the cheese, green peppers, and pepperonis seemed to pop, at least when compared to the gray sheen that used to cover Domino’s pizzas. It looked pretty good. Turns out that’s because there’s a hell of a lot of grease on these pizzas, or at least the grease is more on the surface than it used to be. The box below the green-pepper pizza was so soaked with grease that there was a layer of grease left between the cardboard and the pizza; there were literally no more places for it to hide.

But amazingly, in spite of the grease soaking through the crust and discoloring it to an unhealthy-looking yellow, the pizza itself didn’t taste overwhelmingly oily. Actually, it didn’t taste like much of anything. Domino’s may have finally loaded the sauce up with spices (and, according to that video, an uncomfortably bleeped-out mystery ingredient), but that didn’t change much, apart from adding an unexpected sweetness and a bit of thickness. The cheese, which includes a bit of provolone for flavor, benefited from a bit of garlic butter that soaked through from the crust, but otherwise didn’t add much to the equation. The crust (dusted with something, possibly cornmeal) certainly no longer had the consistency of cardboard. Quite the opposite: It was so floppy, I feared half of each slice would drip onto the ground. And the edges smacked of that aforementioned garlic butter, a lot like Domino’s breadsticks that have been around for a while. This last point received a mixed reaction in the office, as some welcomed the burst of flavor, while others dreaded reaching the end of the slice. The inconsistency in taste extended to the types of pizza too, with the mushroom and cheese receiving the lowest marks, the pepperoni landing somewhere in the middle, and the green-pepper pizza winning the day with less floppiness, a more natural flavor-blending of sauce and cheese, and reduced overall post-pizza queasiness. Overall critical consensus: “Eh.”

Still, it says a lot about Domino’s old pizza that this pretty-much inoffensive new variety is an improvement. None of us could really taste a distinct difference—between this and the old one, or between this and pretty much any random frozen pizza—but we knew it was there. And in those rare times none of us Chicago folk feel like ordering from the countless vastly superior local chains, this one might fill our quota for pizza or pizza-like substance.

That is, if these stomach pains ever settle. It’s still cheapo pizza, after all.

•“It looks the same as it did before. The grease is bleeding off the crust.”
•“If I didn’t know it was Domino’s, I’d say this was okay pizza.”
•“You know, it's not great, but it's not bad. The crust is way too buttery for my tastes, but I don't mind the sweetness of the sauce. The cheese is a little funky, though.”
•“I honestly can't remember the last time I ate Dominos—not to be a snob, but we live in Chicago. Why would you need to settle?”
•“The green-pepper pizza had a more muted taste than the others, but that could just be an aberration. There was definitely less sauce on it.”
•“It’s falling apart as I pick it up.”
•“Really floppy.”
•“The cheese is really crappy—there’s no taste, and there’s this horrible mushiness. It’s not solid.”
•“The cheese melts in my mouth.”
•“The crust is certainly more doughy.”
•“The sauce is awfully sweet. Almost sugary rather than savory.”
•“I’d never order this pizza again, because the cheese is so bad.”
•“Doesn’t taste any sadder to me than any delivery pizza.”
•“Good for a bite or two, at least.”
•“Way better than Domino’s used to be. Instead of the worst pizza in the city, this is entirely generic pizza.”
•“With its new pizza, Domino's has finally, conclusively risen to the level of mediocrity. Almost.”
•“My hands smell really bad after eating. They smell like toe cheese.”
•“They’ve strayed too far from cardboard. This crust is too soft. It could actually stand to be a little more cardboardy.”
•“The crust tastes a lot like cheesy bread.”
•“The sauce has a little bit of kick to it. Not a lot, but there’s a minor cumulative effect, like there’s a little bit of flaked red pepper in there somewhere.”
•“Last time I ordered Domino’s, I literally couldn’t eat it. This is boring, as opposed to bad.”
•[Fifteen minutes later.] “My stomach isn’t liking this. Dammit, I knew eating this shit when I was ravenous was a bad idea.

”Where to get it: Dominos.com has a store-finder and online ordering for those near a Domino’s location.
Posted by Robalini at Friday, January 22, 2010

Email ThisBlogThis!Share to TwitterShare to FacebookShare to Pinterest
Labels: Domino's

Hey your website is nice
Take a look at that cool emo song:
http://tinyurl.com/a6olap