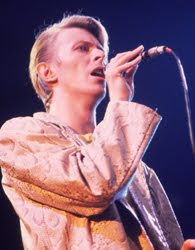 David Bowie is one of the most iconic rock musicians of the 20th century. Releasing chart-topping solo tracks as well as successfully collaborating with Lou Reed, Queen and John Lennon, Bowie has reinvented himself and his music a number of times throughout the last five decades. His performance career began with saxophone lessons at age 13 and continues today, with additional artistic experiments in mime, acting and producing.

David Bowie was born David Robert Jones on January 8, 1947. As a child in South London, Bowie developed an early interest in music, learning to play the saxophone at 13. Within three years, he was recording music with various rock bands, turning his talent into a profession.

A schoolyard fight over a girl led to the permanent dilation of the young rocker’s left pupil, which accounts for his famously different-colored eyes. By 1966 Bowie had recorded three singles with as many bands. At that point, he changed his name from Jones to Bowie, to avoid confusion with Davy Jones of the Monkees.

After releasing a flop solo album, the artist went to a Scottish Buddhist monastery for several months. He later studied mime and formed his own company, the Feathers, in 1969. After the Feathers dissolved, he helped to found the experimental Beckenham Arts Lab.

To subsidize the Beckenham Arts Lab, Bowie signed with Mercury records and released the album “Man of Words, Man of Music.” The album track “Space Oddity,” was released to coincide with the 1969 U.S. moon landing was a hit in Europe. (It didn’t catch on in the U.S. until 1973.)

That same year, Bowie transformed his image and became “Ziggy Stardust,” a rock star from outer space. The album “The Rise and Fall of Ziggy Stardust and the Spiders from Mars” was released at the height of the glam rock movement, and helped earn Bowie international fame.

Throughout the 1970s, Bowie continued to make his own solo albums, and began producing music, including Mott the Hoople’s album, “All the Young Dudes,” and Lou Reed’s album, “Transformer.” Bowie’s hit single “Fame,” released in 1975, was cowritten by Bowie, John Lennon and guitarist Carlos Alomar.

He reassumed an otherworldly persona to star in the 1976 cult film “The Man Who Fell to Earth.” In the 1980s, Bowie explored his passion for other art forms, including film, theater and painting. For four months in 1980, he received rave reviews on Broadway for his portrayal of John Merrick, the protagonist of “The Elephant Man.” Musically, he collaborated with artists like Mick Jagger, Queen, Bing Crosby and the Pat Metheny Band, while releasing hit singles like “China Girl,” and “Modern Love.”

The musician found his own modern love in Somalian supermodel Iman, who he married at a civil service in Switzerland in 1992. Bowie was inducted into the Rock and Roll Hall of Fame in 1996 and continues to make music.

Bowie is perhaps best known for his ability to reinvent himself. As he embodied varied personas for his albums and tours, Bowie became “one of the first star to make idolization—the idea that his fans would place him on such a high pedestal that he could never again be ‘one of us’—part of his act,” wrote Lynsey Hanley in the Guardian.

Bowie suffered from cocaine and heroin addictions and declared himself homosexual in the 1970s. But the rocker’s life, previously so turbulent, has eventually achieved a settled quality it lacked in his youth. In a 2003 interview, Bowie told Beliefnet, “I’m very at ease, and I like it … [S]omebody said that as you get older you become the person you always should have been, and I feel that's happening to me. I'm rather surprised at who I am, because I’m actually like my dad!”
Posted by Robalini at Saturday, January 16, 2010