"When You're Strange": The real Jim Morrison 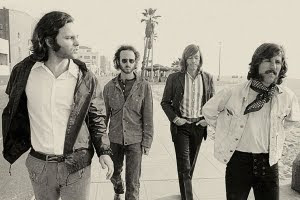 During a concert recording heard on the soundtrack of Tom DiCillo's trippy, fascinating documentary "When You're Strange," Doors lead singer Jim Morrison demands of his audience, "Would anybody in here like to see my genitals?" When the response to that rhetorical question has died down, Morrison continues: "I don't think there should even be a president, man. I think we should have total democracy."

It would be easy to conclude that the Lizard King was massively wasted on booze or hash or acid or some other drug cocktail of choice on that occasion, and that moreover he was kind of a self-important idiot. Both things are very likely true, but the intellectual thread that connects Jim Morrison's cock to the White House is not as flimsy as it appears. However you feel about the Doors and their music -- and DiCillo's generous and substantial film leaves room for varying interpretations -- the band had an outsize cultural impact, embodying the Dionysian macho-rebel spirit of late-'60s white (male) American youth with psilocybin intensity.

At this point, documentaries about '60s rock bands constitute their own genre, and it's frequently a tiresome one: Clips of civil-rights protests and Vietnam firefights, a highlight tour of assassinations and campus uprisings. There's a little bit of all that in "When You're Strange," but the film stands out for several reasons. There's the total absence of talking-head interviews with grizzled scenesters (or any other present-day footage); the cool and measured narration by Johnny Depp (clearly the perfect choice); the direction by DiCillo, a hard-luck indie veteran making his first documentary. "When You're Strange" is also free of the "fair use" copyright restrictions that plague so many rock docs. All the surviving band members signed off on the project, and you'll hear all the major Doors hits (from "Break on Through" and "Light My Fire" to "L.A. Woman" and "Riders on the Storm") in this film, which has been timed to accompany a 13-song soundtrack release from Rhino Entertainment.

"When You're Strange" consists almost entirely of archival material: home movies and photos, concert and rehearsal footage, period TV broadcasts, even clips from a UCLA student film in which Morrison appeared before he became famous. Especially since we're talking about a band whose entire career spanned less than five years (from early 1967 to Morrison's death in the summer of '71), this strategy collapses the historical distance between us and the Doors, and spares us the morass of maudlin pseudo-Proustian reflection into which many such pop-nostalgia films tumble. Furthermore, this underscores the ways that Morrison, in all his confusion and self-contradiction -- reclusive poet, leather-clad sex god, reluctant celebrity, abusive drunk, pop star with limited musical gifts -- remains a vital cultural force, the conscious or unconscious model for many rock stars, actors or rappers who came later.

While it's entirely true that nobody's made a Doors documentary before, the band has already been the subject of a quasi-legendary film. Oliver Stone's 1991 "The Doors," featuring a mumbling, incoherent Val Kilmer as Morrison, is the ne plus ultra of fictional '60s films. It transcends the so-bad-it's-good genre in a lysergic, sweat-lodge cloudburst. It's not even quite accurate to say that "The Doors" is so bad it's a masterpiece, although that's close. It's more like a risible mass of clichés and a visionary masterwork of cinema at one and the same moment. Even though Doors guitarist Robby Krieger and drummer John Densmore served as "technical advisors" to Stone's movie, they were irritated by its portrayal of Morrison as a drug-addled, death-obsessed shamanistic babbler. Keyboardist Ray Manzarek (who refused to help Stone) has long vowed to help produce an "anti-Oliver Stone" movie that would tell the band's real story. Almost 20 years later, "When You're Strange" is that movie.

Certainly the historical Morrison we see in DiCillo's film is a long way from Kilmer's debauched rock idol, and more a nuanced, confused human being. The son of a career Navy officer -- an admiral who commanded a fleet during the Vietnam War -- Morrison grew up infatuated by Arthur Rimbaud, William Blake and Elvis Presley, which is almost all you need to know about him in one sentence. The band's name came not from Aldous Huxley's drug memoir "The Doors of Perception" but from Huxley's original source, Blake's poem "The Marriage of Heaven and Hell."

Morrison reportedly disliked his own singing voice (he preferred Frank Sinatra's) and told a friend he was afraid he had nothing to say. As Marshall McLuhan and Andy Warhol could have told him, none of that mattered: Morrison's brooding, let's-fuck persona and unpredictable stage behavior sent their own message, for which the Doors' music, and even his own droning baritone and portentous lyrics, sometimes seemed like context or background.

That said, DiCillo does an outstanding job of explaining the Doors' musical oddness: They were a rock band with no bass player to keep the beat, whose members had little rock experience. Morrison had never sung before (outside the shower) and Manzarek was a classically trained pianist and organist. Densmore was a big-band and jazz drummer, and Krieger a flamenco guitarist. They weren't aping either Chicago blues or Merseyside pop, they didn't sound quite like anyone else and there genuinely was something elliptical -- something symbolic or even spiritual -- behind the sex-and-drugs double entendres of their songwriting.

"When You're Strange" offers a mesmerizing, behind-the-music glimpse at a crucial and bizarre moment in rock history, and maybe in American cultural history, period. Certainly all the legendary episodes are here: the Doors' sudden lurch from third billing at the Whisky a Go Go on the Sunset Strip to a three-record deal with Elektra; their acid-trip forays into Joshua Tree and marathon recording sessions with Paul Rothchild and Bruce Botnick; Morrison passing out on stage in Amsterdam, antagonizing cops in New Haven and (apocryphally) exposing himself in Miami. (The wacky witch-journalist girlfriend, played by Kathleen Quinlan in Stone's film, is reduced to an unnamed parenthetical here.)

Still, even though this authoritative and often mesmerizing film provides a crucial counterweight to Stone's "The Doors," it could use a little of the latter film's bogus Nietzsche-Blake-Huxley babblequest. To grasp what Jim Morrison and the Doors were all about, you need to watch both movies one after the other, consume a whole bunch of drugs and beer and sugar and then drive out into the American desert half-dead from hangover. And then maybe you'll understand it all for a split second, or understand that there was never anything to understand in the first place, or that you already understood it as well as you ever will. I'm sure Doors fanatics already know this, but DiCillo's movie blew my mind in revealing that "Mr. Mojo Risin'," the repetitive chant from the end of "L.A. Woman," is an anagram for "Jim Morrison." Whoa. Damn! This shit is powerful, dude.