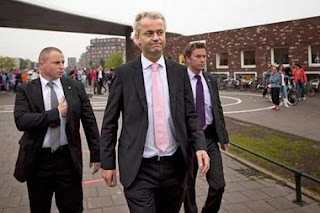 Dutch voters boost far-right party of Geert Wilders
Spurred by anxiety over immigration, Islam, and the economy, Dutch voters put the center-right Liberals in the lead in national elections, and gave a strong boost to Geert Wilders's Freedom Party, which proposes banning the Koran and the building of new mosques.
Robert Marquand, Staff Writer / June 10, 2010

The Dutch woke up Thursday morning to a striking new right-leaning political reality after Wednesday’s national elections ratified both a conservative emphasis on austerity and a populist push against immigration and Islam.

It was the first European elections since the Greek debt crisis put the euro in a funk – and results proved so fragmented that forming a ruling Dutch coalition will be difficult and may take months.

The budget-cutting center-right Liberals (conservatives in US parlance) under Mark Rutte gained the most seats, 31. But the center-left Labor Party took 30, led by former Amsterdam mayor Job Cohen, who ran on a “bridge-building, hate-busting” campaign.

Mr. Rutte ran on cutting spending by more than $50 billion in coming years. Should the telegenic and youthful politician cobble together a like-minded coalition, it would mark the first conservative Dutch government in a century. He told reporters Thursday that "I would like to see a new cabinet put together as soon as possible because of the seriousness of the economic crisis."

If Mr. Cohen should prevail, he would be the Netherlands' first Jewish prime minister – and would represent a formidable bully pulpit against a growing chauvinist feeling in the country. Cohen is known for bringing calm to Amsterdam after the assassinations of anti-immigrant figure Pim Fortuyn and Theo Van Gogh, whose anti-Muslim film caused a furor, and brought fear and anger to the usually mild city several years ago.

The biggest winner, however, is the flamboyant and extremist politician Geert Wilders, whose Freedom Party platform to ban the Koran and mosque-building defied election polling data and jacked him from 9 to 23 seats. Mr. Wilders’s rise as leader of what is now the No. 3 party in the Netherlands is considered a bellwether of a surlier sentiment in a country traditionally tolerant but now anxious over Muslim minorities.

A straw poll of Dutch junior high and high school students prior to the election showed Wilders actually winning the election among Dutch youths, as reported by DutchNews.

"The Netherlands chose more security, less crime, less immigration, and less Islam," a delighted Wilders told Dutch TV viewers last night. In a post-election rally, he was more colorful: “I say to all the newly elected Freedom Party MPs of our beautiful party, bring battering rams with you, because starting tomorrow, we're going to give them hell!”

The biggest loser is Prime Minister Jan-Peter Balkenende. After a bumpy eight-year rule from the center-left, Mr. Balkenende’s Christian Democrats went into free fall, from 41 to 21 seats. The prime minister said he will resign pending a new government.

The Dutch government broke up in February partly over its participation in the Afghan war, but election campaigning was dominated by the economy.

The Netherlands is in far better financial shape than most eurozone states, but voters in the fiscally conservative nation are concerned about negative forecasts as well as higher borrowing costs and bank debt. A 2008 government takeover of the Netherlands' flagship bank, ABN AMRO, cost $35 billion, and is well-remembered.
Posted by Robalini at Saturday, June 19, 2010