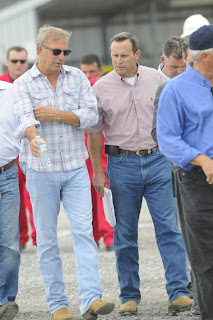 News agencies reported on the actor's premiere staged at the docks in the oil industry supply port of Port Fourchon in southern Louisiana as BP began deploying 32 of his "dream" machines to separate oil from water. Costner's backdrop was an oil-finding barge with his machines mounted on the deck.

"At its core, my dream, this machine, was designed ... to give us a fighting chance to fight back the oil that's got us by the throat," Costner told reporters.

"When you are in a fight, anybody knows you go to confront it right where it is. You don't wait for it to come to your door," the actor said.

Costner's company, Ocean Therapy Solutions, signed a contract with BP to provide 32 units expected to work in the next 60 days.

Costner said each machine, called a V20, can separate 210,000 gallons of oily water a day.

Costner, best-known for such films as "Dances with Wolves" and "Waterworld," stressed he was no overnight oil spill sensation. He has been trying to employ the technology designed by his company for the past 17 years, and has invested more than $20 million of his own money in its development.

The technology was developed two decades ago by a researcher at the Idaho National Laboratory by scientist David Meikrantz, who initially sought to use the machines to separate the components of nuclear substances.

In 1993, INL licensed the technology to Ocean Therapy Solutions, a company owned by Costner.
Posted by Robalini at Wednesday, June 30, 2010