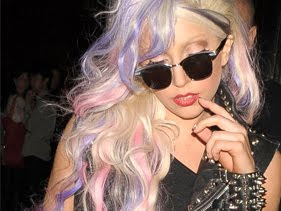 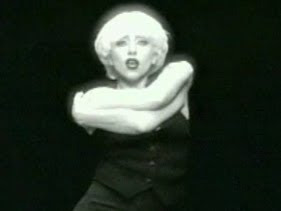 Jun 8 2010
Lady Gaga's 'Alejandro' Video: German Expressionism With A Beat!
Dark, arty clip is about as far from 'Telephone' video as she could get.
James Montgomery

To view the video:
http://www.mtv.com/videos/lady-gaga/522273/alejandro.jhtml

At this point in her career, Lady Gaga can do whatever she wants, whenever she wants. She is unbound, unbridled, and completely without fear ... and "Alejandro" is proof of that. It is a very glamorous, very art-y thing — and anyone expecting a video like her last one should give up that hope right now.

Because, having already run roughshod through the pulpy pop culture of yesteryear with Beyoncé in her "Telephone" video, Gaga decides to play it comparatively straight with "Alejandro," a video that's long on style but short on storyline and "Caged Heat" references.

Which is another way of saying that it's not exactly a fun video. And while it's not fair to compare the two clips — since they have nothing in common outside of being released consecutively — "Alejandro" is about as far from "Telephone" as she could get.

Eschewing the hyperkinetic look, feel and pacing of the latter, "Alejandro" is instead influenced by the smoky, darkly decadent art and fashion of 1920s Weimar Germany (the artistically fertile but politically and economically difficult era, depicted in the 1970s film "Cabaret," that preceded Hitler's rise to power), all carefully crafted close-ups, languorously smoked cigarettes and oppressively cut costumes. And much like the films of the Weimar era — expressionist stuff like "The Cabinet of Dr. Caligari," "Metropolis" or "M," anything featuring Marlene Dietrich — there's an artful level of moroseness to the entire thing, be it in the opening funeral scene, the bleak staging of several dance sequences, or even the sheer amount of time Gaga spends sprawled across a bed. Try as she might, she just can't seem to find the strength to rise up ...

Of course, in working with acclaimed fashion photographer (and proud outsider) Steven Klein, Gaga has created a world that, while oppressive, also looks great. There's art in nearly every frame, and Klein's eye brings to mind the work of Tarsem (R.E.M.'s "Losing My Religion," if you're keeping score), particularly in the way he photographs the still scenes: placing actors just so, moving an elbow here or a chin there, getting the angles and the lighting just right ... there are shots here that look as if they were ripped from the wall of a gallery.

The fashion runs the gamut from Steam Punk-lite (check Gaga's goggles), to S&M, not to mention a few scenes in which LG is dressed as a (sort of) nun. As she told Larry King last week, there's also a "homoerotic military theme" to the thing — though most of said military attire seems to have been influenced (again) by German soldiers, this time from the Nazi era. It's all fabulously decadent, yet in keeping with the feel of the clip, oddly restrained ... well, except for the part where she's wearing a bra with assault-rifle barrels attached to it. (She is, after all, still Lady Gaga.)

And of course, there are instances that will probably make the Catholic church squirm, scenes that turn sexual standards on their collective ears, and lots of shots that remind you of Madonna's ultra-glam "Vogue" video (or, really, any of her work with director David Fincher). Because, again, this is Lady Gaga. And to that point, "Alejandro" is a work that is singularly, 100 percent her, arty and obtuse and, yes, even a little self-indulgent. But what can we say? By now, she's certainly earned it.
Posted by Robalini at Wednesday, June 16, 2010