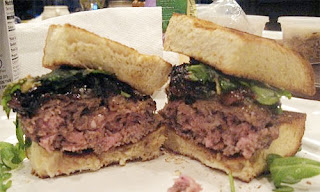 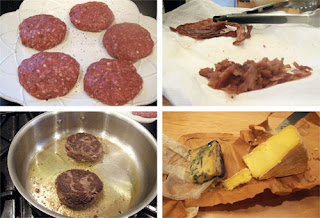 In honor of Father's Day, you should consider what matters most to the patriarch of the family. Allow me to speak on his behalf when I say that hamburgers are near the top of that list. As any true foodie can tell you, there is a certain intangible greatness to the hamburger that makes it so much more than mere ground chuck suspended between two pieces of bread—the sum is unimaginably superior to its parts.

If I could choose to eat any single hamburger that exists on this planet it would be Sang Yoon's venerable Father's Office Burger. The complex arrangement of ethereal flavors brings a delectable vibrancy to my mouth. It is just about the only hamburger I eat where I have to pause and reflect upon its greatness after every bite. Yoon blends dry aged ribeye with his ground chuck to give the meat blend a more sophisticated flavor. The bacon-caramelized onion reduction brings your palate to life with a sweetness that supplants the need for ketchup and other flavor-camouflaging condiments, which are strictly taboo at this Santa Monica landmark. That sweetness is also balanced out perfectly by the subtle bitterness of arugula and a Gruyère-blue cheese mixture melted gently atop the patty.

To recreate a similar style of burger in my home kitchen has long been on the "to-do list" and, really, what burger could have a more fitting title for the holiday at hand this weekend? Hence, Father's Office Day was born, paying homage to the two of the most influential figures in my life: my dad and epic hamburgers.

A great deal of this event's joy was in the artistic journey of culinary creation rather than just the end result. But who I am kidding — I love the juiciness of that end result. Cooking at home with your family can be a very rewarding and unifying experience — in addition to suicidally frustrating if proper preparation is eschewed. Therefore, it's best to make a list of all the ingredients you will need to make your personal specimen of burger perfection. And bring lots of alcohol to entertain yourself and family during the prepping phases.

I made my list, checked it twice, and headed to the store purchasing roughly $7 worth of cheese, $18 worth of meat, $5 worth of bread, and $4 worth of arugula and onions. These $34 or so worth of ingredients made five hearty sized patties, about $7 a burger. Considering that Sang Yoon is now getting roughly $14 at Father's Office, I would consider my offering to be 100 percent discounted.

I inserted subtleties into my Father's Office recreation to make it distinctly my own. For example—owing mostly to the limited availability of ground dry-aged ribeye—I decided to mix my ground beef with a small amount of organic ground lamb. The end result was a patty with just the smallest hint of gamey-ness—so subtle that one of our guests wasn't able to taste it until we told him there was lamb in the burger.

One of the more distinct flavorings of the Father's Office Burger is the molasses-like compote that features pieces of crumbled bacon mixed into sweet caramelized onions. In order to make this I crisped eight slices of bacon in a griddle and pulled them out to dry and degrease. I then threw all of the chopped onion into the same griddle and simmered it at a low temperature while bathed in the remaining bacon grease. I slowly added some sugar, salt, and pepper into the mix as the onions caramelized. After they become a light brown color I threw in the dried, crispy bacon and waited for the reduction to turn a deeper brown. The smell at this point was so irresistible that the family dog was barking uncontrollably, pleading for even the most minuscule handout.

The compote was not only a joy to create but it packed a wallop of concentrated deliciousness that helps to define the Father's Office variety as well as my own. For the cheese—which I melted on the patties after they were done frying in bacon grease—I blended one part of blue with three parts Gruyère so the blue wouldn't overpower the other flavors. I topped the burger with arugula, and used thick-cut toasted challah as buns. Then it was time to serve my edible masterpiece to dad.

I turned to him at the dinner table while enjoying the fruits of my labor to see if he liked his Father's Day meal. I was astonished to see there was not even a shred of evidence that a hamburger had existed on his plate just moments earlier—a far greater compliment than words could ever convey. My mom, a self-avowed pescatarian for some 15 years, was so intrigued by the exuberance at the table that she shocked the entire family by trying her first bite of red meat—with bacon, no less—in over a decade! As you can tell from these pictures, even though the burger was cooked medium, it was clearly a job well done.