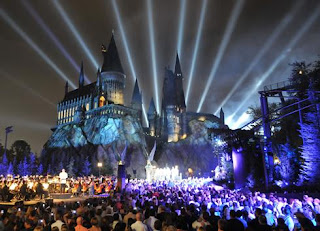 "Bloody hell!" says Matthew Lewis when asked to describe it.

Lewis, who plays Neville Longbottom in the Harry Potter films, was at Islands of Adventure this week for opening festivities; the attraction officially opens today.

"I did actually love the Dragon Challenge," Radcliffe said Thursday during a news conference. "The technology they're using in this is really quite amazing."

The Dragon Challenge features a Chinese Fireball coaster and a Hungarian Horntail coaster. It includes twists, upside-down loops and a free-fall that probably is just a second, but feels like 10.

Radcliffe and the other Harry Potter actors are featured via video in parts of the attraction.

"The castle. I just can't stop looking at it."

Neither could most of the guests. Stepping into the castle is like stepping onto a movie set — or into the actual Hogwarts. And the Harry Potter and the Forbidden Journey ride, though not an actual roller coaster, feels like one. The visual effects are stunning and a little scary. (Ever been breathed on by a Dementor?)

Bob Sehlinger, theme park enthusiast and co-author of The Unofficial Guide to Walt Disney World 2011, offers insight into what makes the ride so realistic.

The cutting-edge technology Universal used for the ride includes the Kuka Arm, a high-tech robotic device, and Musion Eyeliner, a high-definition video-projection system that creates 3-D holograms. The Kuka Arm, says Sehlinger, swoops and moves in any direction. The arm usually is a fixed platform. Universal, however, made it mobile.

"In Forbidden Journey, these things are mounted on track vehicles — little trains, so to speak. (They) move you from scene to scene. It's never been attempted" at a theme park, Sehlinger says.

The Musion Eyeliner's life-size holograms are used in the chambers where the story is introduced. It brings the characters to life, Sehlinger adds.

Sehlinger says J.K. Rowling, the best-selling author who created Harry Potter, signed off on everything at the attraction, from the food served in the restaurants to the drinks and merchandise.

"She vetoed serving any kind of Coke product," Sehlinger says. "So Wizarding World has its own special Harry Potter-themed foods and beverages."

Like butterbeer, which comes in frozen and fountain varieties. It tastes like a light cola with whipped cream on top.

Visitor Katie Cross of Flagstaff, Ariz., was especially taken with the food. "I'm a big candy freak, so I love Honeydukes."

For theme park guests unfamiliar with the Potter hoopla, Sehlinger suggests brushing up on the topic before you go.

"There's just so much iconography from the films," he said. "It's just more meaningful if you know a bit about Harry Potter."

But even if you don't, "if you're going just to ride a roller coaster, you won't be disappointed," he says. "It's a great coaster."