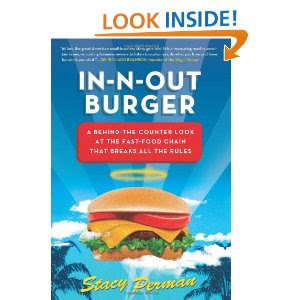 In-N-Out Burger: A Behind-the-Counter Look at the Fast-Food Chain That Breaks All the Rules
Stacy Perman

Amazon Best of the Month, April 2009: With In-N-Out Burger: A Behind-the-Counter Look at the Fast-Food Chain That Breaks All the Rules, BusinessWeek writer Stacy Perman presents a chronicle of how a family-run California hamburger joint went on to become an American pop culture icon. Founded in 1948 by Harry Snyder and his wife Esther in Baldwin Park, CA, In-N-Out Burger attracted a cult-like fanbase of cruising teens, surfers, and celebrities alike (who developed a secret shorthand for custom orders). As they expanded slowly over the years across California and into Nevada, Arizona, and Utah, they never sacrificed their core customer-service values and commitment to quality. Their made-to-order success story packs enough family drama to fuel an HBO miniseries. After Harry died in 1976, his son Rich took over the business (and was responsible for adding discreet Bible verses to In-N-Out cups and wrappers) until his death in a 1993 plane crash. His brother Guy, a drag-racing rebel with a dark side, stepped in to helm the business until his accidental overdose in 1999. If you've never had an In-N-Out burger, Perman's book just might inspire you to find a good reason to get yourself to Southern California and seek out an off-the-menu 3x3 with a side of Animal Style fries. --Brad Thomas Parsons
--------------------------------------------------------------------------------
From Publishers Weekly

Perman (Spies Inc.) casts an affectionate and admiring eye at In-N-Out Burger, the family-owned, Southern California chain that has become a cultural institution without franchising, going public, changing its menu or precooking its burgers. This book traces the history of the company and the Snyders, the family that founded and still owns In-N-Out, interspersed with the evolution of the fast-food industry. Perman never makes good on her promise to go behind-the-counter and analyze the company's dealings—her access to executives and family members did not extend to gleaning financial or strategic information—consequently it's never clear whether In-N-Out's conservatism is a conscious business strategy, a personal preference of the owners or plain complacency. More a glowing fan letter from an appreciative customer than exposé, this book has more to say about the company's celebrity fans, American family dynamics and our collective love affair with fast food. (Apr.)
Copyright © Reed Business Information, a division of Reed Elsevier Inc. All rights reserved.

In-N-Out Burger is a regional hamburger chain (California, Arizona, Nevada, and Utah) with a cult following. The chain is known for its eccentricities—e.g., a secret menu and tiny Bible verses printed on almost everything—but its strangeness contributes to its appeal. In this dense history, Perman (Spies, Inc.: Business Innovation from Israel's Masters of Espionage) follows three generations of the Snyder family as they expand their business from a hot dog stand to a chain found in 200 locations. Perman lays the groundwork for contrasting family-owned In-N-Out with megacorporation McDonald's, but this appealing theme simply disappears. Founder Harry Snyder was simultaneously a fast-food innovator (he invented the two-way speaker box) and a micromanaging Luddite who seemingly succeeded in spite of himself by being in the right place at the right time. As Perman details two more generations of family dysfunction, her dry tone keeps the reader from the more engaging episodes. Interest in this sometimes plodding text will be proportionate to the reader's affinity for the brand. Recommended for local devotees of the chain and for some readers in American popular culture.

“Thanks to Stacy Perman’s book, the term ‘soulful fast food’ is no longer an oxymoron. Her recounting of the In-N-Out story is one of passion, good intentions, remarkable success and treachery that transcends the burger world to become a tale that is vivid Americana.” (Jane and Michael Stern, Roadfood.com )

“Did you ever wonder why the people behind the counter at In-N-Out are always smiling? Now I know thanks to Stacy’s amazing book.” (George Motz, filmmaker and author of Hamburger America )

“ Wow! Stacy Perman’s In-N-Out Burger isn’t just a good book about the rise of a fast-food chain—it’s an exciting saga about a family who created a profitable company that serves great food and still treats its customers and employees decently. What a great story!” (Andrew F. Smith, author of Hamburger: A Global History )

“The tumultuous history of how one family and the business they fought to control turned the hamburger into the culinary symbol of a century....Told with the same fresh approach that has turned In-N-Out Burger into an American institution, Perman keeps us wanting more.” (Tilar J. Mazzeo, author of The Widow Clicquot )

“This book grills up an enjoyable read for both avid foodies and novice diners alike! Perman’s sneak peek into the fascinating history of In-N-Out is as good as the delicious burgers themselves, and that’s saying a lot!” (Mario Batali, chef and author of Molto Italiano )

“Stacy Perman’s illuminating new book, In-N-Out Burger, is an absorbing case study of how a family business came to be at the center of its own cheerful cult.... [This] should be required reading for family business owners, alongside Rich Cohen’s Sweet and Low and Thomas Mann’s Buddenbrooks.” (Fortune Small Business )

“At last, the great American small business story gets told. It is a reassuring read in uncertaintimes, reminding business owners to listen to customers, do what you love, and havefun while you do it.” (Sir Richard Branson, founder of the Virgin Group )

“When fast food restaurants tried to locate in Fishermans Wharf, ourlocal merchants were opposed to every one of them—except In-N-Out.Because every meal is fresh and made from scratch, In-N-Out is in aclass by itself.” (San Francisco Mayor Gavin Newsom )

In fast-food corporate America, In-N-Out Burger stands apart. Begun in a tiny shack in the shadow of World War II, this family-owned chain has stead­fastly refused to franchise or be sold. It is a testament to old-fashioned values and rem­iniscent of a simpler time when people, loyalty, and a freshly made, juicy hamburger meant something. Over time, In-N-Out Burger has become nothing less than a cultural institu­tion that can lay claim to an insanely loyal following.

Perman uses her investigative skills to uncover the story of a real American success story. It is not only a tale of a unique and profitable business that exceeds all expectations, but of a family's struggle to maintain a sustainable pop empire against the industry it helped pioneer, internal tensions, and a bitter lawsuit that threatened to bring the company to the brink.

This is a lesson in a counterintuitive approach to doing business that places quality, customers, and employees over the riches promised by rapid expansion. In-N-Out Burger is a keenly observed narrative that explores the evolution of a California fad that transformed into an enduring cult of popularity; it is also the story of the conflicted, secretive, and ultimately tragic Snyder family who cooked a billion burgers and hooked a zillion fans. As the story of In-N-Out Burger unfolds, so too does the cultural history of America as influenced and shaped by car culture and fast food.

Stacy Perman is a writer with BusinessWeek. A former correspondent for Time, she has also written for Los Angeles magazine, the Los Angeles Times, and the Wall Street Journal. She is the author of Spies, Inc.: Business Innovation from Israel's Masters of Espionage. Born in Los Angeles, she currently lives in New York.
Posted by Robalini at Thursday, June 24, 2010

Email ThisBlogThis!Share to TwitterShare to FacebookShare to Pinterest
Labels: In-N-Out