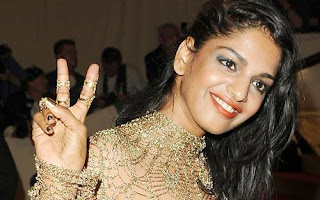 M.I.A. Says Justin Bieber's Videos Are 'More Offensive' Than Her 'Born Free'
'I find the new Justin Bieber video more violent and more of an assault to my eyes ...,' M.I.A. told a British magazine.
James Montgomery

In the past month, M.I.A. has taken shots at Lady Gaga and, uh, the U.S. government. And now, she's moved on to the next logical target: Justin Bieber.

In the current issue of British music magazine NME, M.I.A. was asked about the meaning behind the controversial clip she made for her song "Born Free." And rather than reveal her motivations, she seized the opportunity to rip the pint-size prince of pop, saying that the Bieb's videos are "more offensive" than anything she's ever done.

"I find the new Justin Bieber video more violent and more of an assault to my eyes and senses than what I've made," she joked to the mag.

Perhaps not wanting to further draw the ire of Bieber Nation — which, truth be told, might be more powerful than the U.S. government at this point — she then changed the subject, saying that most people's reactions to the "Born Free" video actually mystify her ... though, to be honest, she's not exactly spending a lot of time thinking about it.

"It baffles me that everyone seems to be obsessed with deciphering the meaning to it," she said. "It baffles me in the same way as the Brick Lane riot for American Apparel leggings baffled me. We don't know what the process is for this one is yet. I haven't thought about it yet and I don't want to have to."

In April, M.I.A. rankled another fervent fanbase — Lady Gaga's Little Monsters — when she accused the pop star of stealing her looks from Grace Jones and Madonna and called her "a good mimic."
Posted by Robalini at Wednesday, June 09, 2010

Email ThisBlogThis!Share to TwitterShare to FacebookShare to Pinterest
Labels: M.I.A.