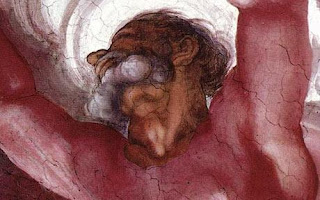 The cleverly disguised drawing of a human brain, which has remained unnoticed for 500 years, may have been a coded reference to the clash between science and religion.

The Renaissance master, who painted the frescoes in the Sistine Chapel between 1508 and 1512, would have been familiar with what a brain looked like – he was an accomplished anatomist who is known to have dissected many corpses.

According to two American neuroscientists, the image of the brain is ingeniously hidden in the depiction of God's neck and chin in "Separation of Light From Darkness", which depicts the first act performed by God in the creation of the universe.

It is one of nine panels on the Sistine Chapel's ceiling based on scenes from the Book of Genesis.

Art historians have long speculated that the strange, lumpy appearance of the figure's neck may represent a goiter.

But Ian Suk and Rafael Tamargo, of the Johns Hopkins University School of Medicine in Baltimore, Maryland, believe instead that it bears a striking resemblance to the crevices and creases of a human brain.

"Stunningly, following Michelangelo's outline, one can draw into God's neck and beard an anatomically correct ventral depiction of the brain," they write in the scientific journal "Neurosurgery".

"We propose that Michelangelo, a deeply religious man and an accomplished anatomist, intended to enhance the meaning of this ... panel and possibly document his anatomic accomplishments by concealing this sophisticated neuro-anatomic rendering within the image of God."

They also believe that an odd-looking, vertical fold in the crimson robe worn by the figure of God represents the spinal cord, and that a mysterious Y-shaped fold at his waist may be an optic nerve.

Leonardo da Vinci had produced a detailed study of optic nerves 20 years previously in 1487, a study which Michelangelo may well have seen when the two worked in Florence at the same time.

The new thesis may explain something that has puzzled art critics for centuries – the peculiar lighting of God's neck.

Most of the fresco is illuminated from the lower left of the panel, but the neck is lit head-on and slightly from the right, casting different shadows.

Profs Suk and Tamargo argue that, far from being a clumsy error by Michelangelo, the peculiar angle deliberately enhanced the anatomical components of the brain.

By merging an image of God with a human brain, Michelangelo may have been seeking a covert outlet to show off his anatomical knowledge at a time when picking apart cadavers was frowned on by the Roman Catholic Church.

Alternatively, he may have been alluding to the wisdom of the Almighty or – more dangerously - hinting at his growing belief that ordinary Christians had the wit and intelligence to directly commune with God, rather than pray to Him indirectly through the Church.

That was an idea that would have been seen as heresy, particularly as the fresco is situated directly above the chapel altar.

Michelangelo's relationship with the Vatican became increasingly fraught during his career.

He fell out with Pope Julius II over payment for painting the Sistine Chapel, and came to loathe what he saw as the extravagance and vanity of the Church.

This is not the first time that medical experts have discerned hidden anatomical drawings in Michelangelo's work.

In 1990, an American doctor, Frank Meshberger, published a report in the Journal of the American Medical Association in which he suggested that a cross-section image of a brain was concealed in another of the Sistine Chapel panels, the "Creation of Adam".
Posted by Robalini at Wednesday, June 30, 2010