You're never too old for funny, sweet toys in 'Toy Story 3' 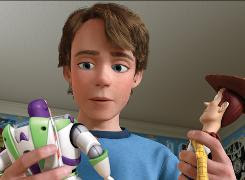 You're never too old for funny, sweet toys in 'Toy Story 3'
6-17-10
All grown up: Andy, now 17, says goodbye to Buzz Lightyear and Woody, who go to a day care when he leaves for college.

The 3-D horn-rims necessary to fully experience the masterpiece that is Toy Story 3 serve an additional useful purpose: a way to hide the tears any sentient being will surely shed by the film's heartfelt conclusion.

How the animation wizards at Pixar keep coming up with innovative and rapturous stories is one of the miracles in modern film. How director Lee Unkrich, veteran Pixar writers John Lasseter and Andrew Stanton, and Little Miss Sunshine co-writer Michael Arndt devised a fresh plot and enchanting characters in this third Toy Story go-round is perhaps the most impressive feat of all.

This installment, the best of the three, is everything a movie should be: hilarious, touching, exciting and clever. The voices behind Woody (Tom Hanks), Buzz Lightyear (Tim Allen) and the rest of the playthings contribute mightily to the character development in what is easily the summer's best movie thus far.

The tale touches the heart as no movie in recent memory has done. Who would think a movie about plastic toys could speak so powerfully to audiences of all ages?

Years have gone by since 1995's Toy Story. The toys' boy, Andy, is now 17 and about to leave for college. His sister, Molly, is an iPod-listening tween, and the once-peppy family dog has slowed to a crawl. Andy's toys have been amusing themselves, though consigned to a toybox. But the gang's future is uncertain: Will they get played with again or languish in lonely obscurity in a dusty attic?

Following a few twists, the toys end up at Sunnyside day care center, "a place of ruin and despair," according to the dramatic Mr. Pricklepants (Timothy Dalton). The movie segues into a prison escape thriller with apocalyptic undertones, the suspense always leavened with laughs.

The beloved characters are back: Woody, Buzz, cowgirl Jessie, Mr. and Mrs. Potato Head, Dinosaur and Barbie. But their character arcs take new turns. Buzz goes bilingual, and Mr. Potato Head sheds his spud for a tortilla. They tangle with formidable foes, including an ascot-wearing Ken doll, the wonky-eyed Big Baby, a worn purple teddy bear named Lots-O'-Huggin' and a screeching Monkey.

The movie's message is simple: Despite time and distance, family and friends are what count most. Change is not to be feared, and even mortality can be faced with pluck and dignity. These themes fuel, but never overpower, the adventure.
Posted by Robalini at Wednesday, June 30, 2010