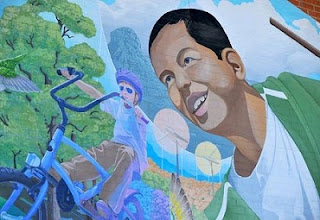 This mural is painted on the side of an elementary school in Prescott, Arizona. Recently completed, it features the faces of children who attend the school, but not everyone is pleased with the outcome.

Prescott City Councilman Steve Blair, who also has a daily radio show on Fox News-owned radio station KYCA-1490-AM wants the mural taken down completely. He claims it depicts an agenda, an indoctrination of public school children. Somehow I do not think this has much to do with indoctrination nor do I think he really cares much about public schools. Especially public schools with brown children in them.

Instead of removing it, the school principal asked the artists to lighten the faces of the children in the picture. This request follows harassment of those same artists by drive-by wingers flinging racial epithets at them while they were painting it. Welcome to Arizona.

Lighten the skin tone on the faces of the children in the picture, because we cannot have brown children representing the children of Prescott.

Hear that, Arizona? That's the sound of the term racist being slapped all over your state whether it's deserved or not. That's the sound of Rupert Murdoch bringing his peculiar brand of thought-cleansing to your backyards. Do not, under any circumstances, make brown children look beautiful without changing their skin color.

And these children, for the past several months as this happy mural encouraging “green transportation” was being painted by local artists, have been treated to the city of Prescott’s finest citizens driving by and yelling “Nigger” and “Spic” at this school wall painted with pictures of the children who attend the school. And this has been encouraged by a city councilman, Steve Blair, who uses his local radio talk show to rile up these people and demand the mural be destroyed.

"I'm not a racist by any stretch of the imagination, but whenever people start talking about diversity, it's a word I can't stand." Daily Courier

"I will tell you depicting a black guy in the middle of that mural, based upon who's President of the United States today ..." Daily Courier

"To depict the biggest picture on the building as a Black person, I would have to ask the question: Why?" AZCentral.com

Of course, when Blair is directly accused of stirring up racial controversy, he cries innocence in the time-honored tradition of Rush Limbaugh and other right-wing loudmouths who immediately decry the accusation of racism while living it straight up for all to see.

"Personally, I think it's pathetic," he says. "You have changed the ambience of that building to excite some kind of diversity power struggle that doesn't exist in Prescott, Arizona. And I'm ashamed of that." - AZCentral.com

Blair isn't just a radio personality who leads off the talkfest there at KYCA-AM. He's a city councilman. He actually has a say in what can and cannot be done in the city of Prescott. His show leads straight into Laura Ingraham and Rush Limbaugh's radio show.

It makes that "family values" part of the right-wing mantra seem so trite, doesn't it?
Posted by Robalini at Thursday, June 10, 2010

Email ThisBlogThis!Share to TwitterShare to FacebookShare to Pinterest
Labels: Arizona

“All Men are created equal”! The founders had it right, when attempting to form a perfect union and they also knew that they were not there yet but knew we one day would get there. Lincoln moved us forward as did JFK and LBJ. This Nation was founded by men of many nations and backgrounds. It was founded on the principle that all men are created equal, and that the rights of every man are diminished when the rights of one man are threatened.

It is my contention that this AZ law is not constitutional and will fail when challenged (unless, of course, they keep adding more amendments), pretty funny for this so called perfect law, that many internet blogs claim it was copied “Word for Word” from the Federal law, which I frankly do not believe, if it was then no amendments would have been made, right?, of course.

As for the undocumented workers, as was attributed to Ronald Reagan “It’s the Economy, Stupid”. When the economy is good we say let’s all celebrate “Cinco de Mayo, my brothers” but when the economy is down “it’s all your fault, you damn immigrant”. This too will pass. The real problem is the narcos, arms and people smugglers and that’s what the focus should be on.

Don’t you find it funny that no one ever voted for Brewer for Governor, it’s all about politics and getting elected, do not be fooled. Busy Brewer has passed S.B. 1070, no permit conceal weapons law, the famous Birthers law, banning Ethic studies law, (could she be behind the Mural in Prescott, Arizona) and if history is a lesson she should look up Arizona’s House Bill 2779 from two years ago (which failed when legally challenged) and the craziest one the boycotted Martin Luther King Day, not wanting another holiday, how crazy is that. I believe there is an undercurrent to their enactment of new laws, they real love following a distinct pattern. Poor Brewer, last week, she first she said her Dad had died in Germany fighting the Nazi in World War II (war ended 1945) and we find out her father was never in Germany and died in California in 1955 (watch the spin doctors go into overdrive) and then she went to Washington and came back empty as always, poor dear.

Your style of presentation is very impressive. The meaningful contribution of your mind reflects on those people who are looking for new ideas and informations regarding Art Gallery Paintings. I would like to tweet on it and keep spying at every moment you blogging.