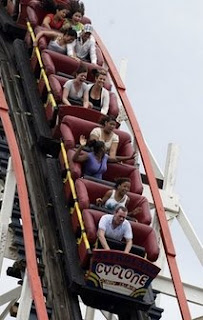 NEW YORK (AFP) – New York's famed Coney Island, long fallen into a state of seedy disrepair, gets a new lease on life this weekend with the opening of 19 new rides including the hair-raising "Air Race."

Mayor Michael Bloomberg hailed a renaissance for the fairground district which had been allowed to "shrink to a shell of its former glory."

These include "Air Race," which simulates the 4G forces experienced by fighter pilots, "Balloon Expedition," "Electro Spin, "Mermaid Parade" and the "The Tickler" -- a twisting roller coaster of switchback curves and steep drops.

Rides will be open until midnight each day of the summer.

City Council speaker Christine Quinn said Luna Park was the first new amusement park on Coney Island in 50 years. "It seems only apt that there is a ride called 'Brooklyn Flyer,' where visitors are able to swing across the sky and see all of Luna Park -- and Coney Island -- from a new horizon," she said.

The amusements are part of a newly defined 27-acre amusement and entertainment district, also including new housing, movie theaters and retail areas.

However, City Council member Domenic Recchia said the Zamperla rides were in the traditional spirit of Coney Island.

"Our critics said the thrill was gone from Coney Island, but they were wrong -- and the proof is right here in Luna Park," he said.

The Brooklyn beachfront neighbourhood, adjacent to the Russian immigrant magnet of Brighton Beach, was one of the world's first amusement parks and credited as the birthplace of the American hot dog.

The decline of Coney Island began more than half a century ago.

Until the opening of the new Luna Park, the area has long been a bizarre mixture of surviving rides, like the rickety Wonder Wheel and the ageing Cyclone rollercoaster, along with lots left empty by speculating developers.
Posted by Robalini at Wednesday, June 09, 2010