17 Things You Might Not Have Known About 'The Lion King' 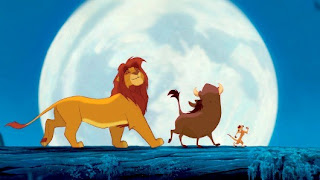 Call it the circle of life: many kids who saw 'The Lion King' in theaters when it opened in 1994 can now take their own kids to see it when the 3D version hits the cineplex on Sept. 16. (The film hits both standard and 3D Blu-ray on Oct. 4.) Of course, it's hard to believe there's a generation that has never been exposed to 'The Lion King'; since the landmark Disney cartoon debuted, it has spawned an industry that's included two direct-to-video sequels, a TV series, several video games and a long-running Broadway musical.

To celebrate the 17-year history of 'The Lion King,' Moviefone has unearthed 17 things you might not have known about the furry film fable, including which Oscar-nominated song Elton John thought would kill his career, the supposed secret "sex" scene, what that chant at the beginning of 'Circle of Life' means, and a precedent-setting blast of warthog flatulence.

1. Originally, the movie was going to be called 'King of the Jungle,' until the filmmakers realized that lions live on the savanna, not in the jungle.

2. Initially, the film was not going to be a musical, but rather, a more realistic, National Geographic-type story. It was lyricist Tim Rice -- who'd worked with Disney on 'Aladdin' -- who suggested adding songs and hiring Elton John to compose them.

3. The film's writers referred to the film in private as 'Bamblet,' noting the similarity between their movie's plot and those of 'Bambi' and 'Hamlet.'

4. Conservative activists objected to a scene where particles in the night sky supposedly spell out, for an instant, the word "SEX." The animators have said that they were actually spelling out the abbreviation "SFX" (for "special effects") as a signature of their work that would be visible only to viewers with sharp eyes (and fast thumbs on the pause button).

5. For inspiration, the animators and artists spent two weeks in Africa, visiting Hell's Gate National Park in Kenya. They also had real lions brought into the animation studio, under the supervision of Jim Fowler, of TV's 'Mutual of Omaha's Wild Kingdom.'

6. The song 'Hakuna Matata' originated with a phrase the animators heard from a tour guide during their African trip. Tim Rice heard the phrase (which, as every fan knows, means "no worries") and noted its similarity to 'Bibbidi-Bobbidi-Boo' from Disney's 'Cinderella,' and he turned it into the film's comic centerpiece. Elton John, however, was afraid the tune would mark a low point in his career. "I sat there with a line of lyrics that began, 'When I was a young warthog," John said in 1995, "and I thought, 'Has it come to this?'"

7. Hans Zimmer, who eventually won an Oscar for composing the instrumental score, brought aboard Lebo M, a South African composer and singer he'd worked with on the film 'The Power of One.' (A self-imposed exile from the apartheid regime, Lebo M was parking cars in Los Angeles when Zimmer met him.) It's Lebo M who added the African choral passages to the score, including the famous 'Circle of Life' chant that opens the movie.

8. Lebo M's 'Circle of Life' chant, translated from Zulu, means, "Here comes a lion, Father/Oh yes, it's a lion/We're going to conquer/A lion and a leopard come to this open place."

9. Nathan Lane and Ernie Sabella, who were co-starring on Broadway in 'Guys and Dolls,' auditioned together, hoping to play hyenas. But the filmmakers liked their chemistry and cast them instead as Timon and Pumbaa, the meerkat/warthog comic relief duo. For the hyenas, the filmmakers initially wanted Cheech and Chong , but the stoner comedy duo had broken up by the time the movie was made. So the filmmakers stuck with Cheech Marin but used Whoopi Goldberg instead of Tommy Chong.

10. 'Can You Feel the Love Tonight' was almost a comic duet for Timon and Pumbaa, but Elton John balked. As a traditional love ballad, marking Simba and Nala's romance, the song became one of three from the film nominated for Oscars (along with 'Hakuna Matata' and 'Circle of Life,') and it won the Academy Award for Elton John and Tim Rice.

11. A musical number called "The Morning Report" didn't make it into the film (it was replaced by dialogue), but it was used in the Broadway musical and was included in the 2002 IMAX re-release and the platinum-edition DVD, accompanied by newly created footage.

12. 'The Lion King' marks the second time that James Earl Jones and Madge Sinclair played royal parents of an African prince. The first time was 'Coming to America,' where they played Eddie Murphy's dad and mom.

13. When Simba (voiced by Jonathan Taylor Thomas) tells Scar (Jeremy Irons), "You're so weird," and Scar replies, "You have no idea," the reference is to a nearly identical exchange between Ron Silver and Irons during the latter's Oscar-winning turn as Claus Von Bulow in 'Reversal of Fortune.'

14. While the characters in the movie are all hand-drawn, computers were used for assistance in some sequences, notably, the wildebeest stampede. In that sequence, a computer multiplied several hand-drawn animals into hundreds and created random paths for them. The resulting two-and-a-half-minute sequence took more than two years to create.

15. 'The Lion King' was the highest grossing movie worldwide in 1994, with a total of $772.6 million grossed around the globe. It's also the top-grossing hand-drawn cartoon of all time and the fourth-biggest animated feature of all time (behind CGI features 'Shrek 2,' 'Toy Story 3,' and 'Finding Nemo') in the U.S.

16. For a long time, 'The Lion King' held the record as the best-selling home video release, having sold 30 million copies on VHS.

17. Pumbaa was the first Disney character to fart.

Email ThisBlogThis!Share to TwitterShare to FacebookShare to Pinterest
Labels: Disney