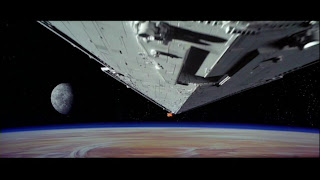 Colin Fleming
Sep 14 2011
Fan favorite Empire Strikes Back may thrill, but A New Hope beats it because for the way it transports viewers to another world
http://www.theatlantic.com/entertainment/archive/2011/09/why-the-first-star-wars-is-still-the-best-star-wars/245128 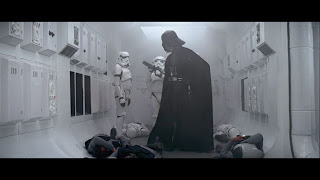 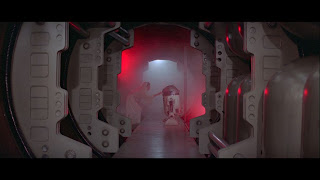 The accepted history goes something like this: The three prequel films are largely rubbish, redeemed only in rare instances, like when Darth Maul appears in The Phantom Menace, or when Anakin/eventual-Darth Vader goes bad in Revenge of the Sith. The original three films, of course, are where it's at. Star Wars, which was later given the subtitle A New Hope, gets plaudits for kicking off the journey and blowing minds in '77. Return of the Jedi, six years later, capped it in Wagnerian style, but also featured the Ewoks, kid-pleasing fuzzballs that embarrassed sci-fi zealots everywhere. The second film—The Empire Strikes Back—has aged the best with the fans, and it remains arguably the most popular of all the Star Wars offerings.

Wherever you turn, Empire does well for itself. Time cited it as a prime example of a sequel that outpaces its predecessor—even if that predecessor is the lone Star Wars representative on AFI's list of the top 100 American movies. And according to Rotten Tomatoes, critics lean towards Empire above all others. It's easy to see why. Empire has always had what you might call movie bling: Think the ice planet of Hoth, AT-ATs, the pop culture hit that was Yoda, lady-loving Lando—"works every time," indeed, baby—and, of course,"I am your father," which may be the most iconic declarative sentence of the 1980s. 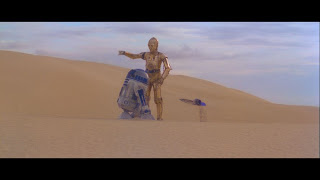 And as much as we enjoy being thrilled by on-screen action, there's nothing like feeling as though you've been rendered invisible and inserted into a film. But Star Wars: A New Hope is better. Unrivaled in its ability to bridge the gap between the people who are sitting in their seats watching the movie and the characters that are dashing about in it, it's film as a congruous journey. Empire, conversely, doesn't have Hope's cohesion, even though its plot, essentially, is that the rebels run away, and assorted incidents, adventures, and anecdotes accrue with great rapidity. 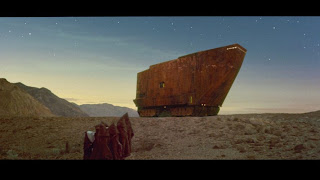 Maybe that frantic pacing is why Empire resonates so much with many of the younger Star Wars fans. There's nothing stately about it. It's action upon action upon action. If you're watching Empire, you've probably already seen the first film, and you've bought into its universe. You know that Han Solo is the galaxy's master of Robert Mitchum-type bad-assery, so it's OK for the filmmakers to give him a few killer lines—like his response to Leia just before getting frozen in carbonite—and turn him loose. The film's emotional resonance—and its cultural resonance, too, really—hinges on its crescendo moments, which are familiar even to people who haven't seen the film: those moments parodied, discussed, and referenced time and again. If you want a popcorn flick that shows what's both good and bad about the mega-blockbuster movie experience, Empire is for you. 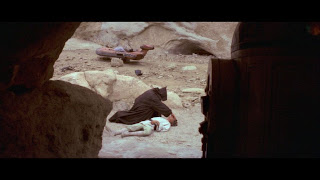 But if you look at a film as a film and not as part of a phenomenon, A New Hope is the galactic gold standard. It's the one movie out of the six Star Wars movies that you can put alongside The Searchers, Bride of Frankenstein, or The Wizard of Oz as an American film masterpiece. There's a lot of talk in it, but that dialogue is not deployed merely for exposition, as it often is in the Star Wars films, but rather for fostering a feeling of place and community within the picture. Its overall look is rougher, with less chrome and gloss, and more dirt and ash. But that griminess lends the film a mood that—despite the triumphant climax—infiltrates you, rather than pumps you up. And there's a beguiling innocence in the film-making that might be unmatched in the medium's history. You get full on visual derring-do, balls-to-the-wall-style, almost as if Lucas and his crew had been granted one chance to do a movie and one chance only. In other words: If anyone wants to try some crazy idea, now would be the time. 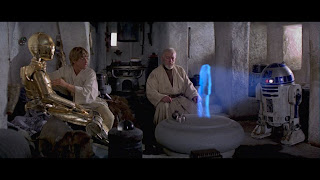 There are plenty of gutsy cinematic moments. The heartrending shot of Luke staring toward the horizon with the two suns overhead is a perfect example of how an internal emotion like longing can be made visual. We're talking distances: a boy far removed from what he wants to be, and celestial bodies far removed from where he is presently standing. 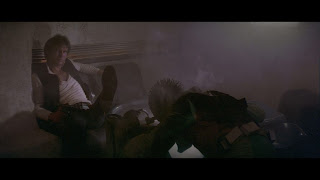 But the film reveals its characters' personalities in more subtle ways, as well. People hang out a lot in A New Hope. Luke and C-3PO get to know each other in a glorified tool shed; Luke and Ben bond in the latter's hut; space chess and early Jedi training occur simultaneously as our plucky band travels from one spot of adventure to the next. We understand these individuals because Lucas had the courage to simply show them together, during their downtime. Viewed in relation to the rest of the franchise—especially the prequels—New Hope's restraint seems radical. 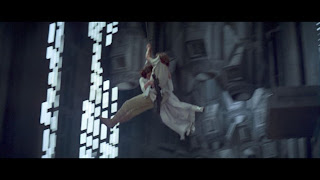 Lucas was well-versed in the old serials, and when you consider all of the transitional wipes and the occasional faux-camp spirit of Star Wars, it's obvious that the film was pitched as an extension of something like The Secret of Treasure Island or Captain Marvel. But Star Wars goes where serials like that never could. Serials rely on spectacle as spectacle; A New Hope uses spectacle to create meaning. Its loud, splashy moments turn to foster quiet, personal scenes. After Darth Vader strikes down Obi-Wan Kenobi, we see Leia consoling Luke in a hushed, almost maternal manner that pulls the viewer into the screen as we note each gesture, each word. You start to feel like you're riding along with these characters, invested in a way that you weren't previously. 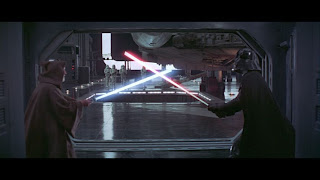 Granted, it doesn't hurt that A New Hope starts with a shot to rival the crane sequence at the beginning of Orson Welles' Touch of Evil or the view down the tower stairs in Alfred Hitchcock's Vertigo. No matter how many times I see it, I can't get over how big that Imperial ship looks as it passes over us in our collective, movie-watching consciousness. That's one of the film's many go-for-broke shots. So is the scene when the Millennium Falcon first blasts into hyperdrive and traverses the infinite vastness of space in a few manic seconds as the stars turn into streams of light. Many of these shots are very fluid, with a nimble camera—or, at least, a camera that wants to get up and guide us, Beatrice-like, through this strange new world. 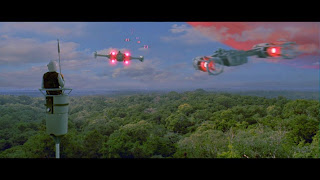 On the other hand, I have a sense of wandering on my own as I watch Empire and Jedi—even though the latter's opening act, set on Tatooine, makes for a great mini-movie. And as much as we enjoy being thrilled by on-screen action, and pulling for one side over another, there is nothing like feeling as though you've been rendered invisible and inserted into a film, relegated to stand just out of view, but privy to every breath and whisper. That's what movie magic really is, and few films put it on display better than the first Star Wars. 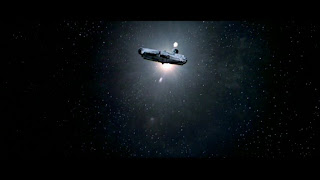 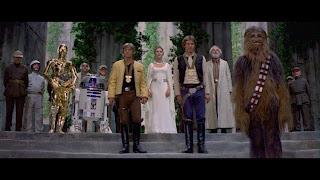