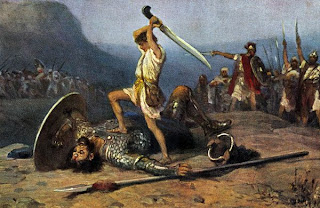 Why We're Overconfident, and Why It Works
Overestimating our abilities can be a strategy for success, model shows
National Geographic News
September 14, 2011
http://news.nationalgeographic.com/news/2011/09/110914-optimism-narcissism-overconfidence-hubris-evolution-science-nature

Believing you're better than you are may help you succeed, a new study says.

For years, psychologists have observed that people routinely overestimate their abilities, said study leader Dominic Johnson, an evolutionary biologist at the University of Edinburgh in Scotland.

Some experts have suggested that overconfidence can be a good thing, perhaps by boosting ambition, resolve, and other traits, creating self-fulfilling prophecies.

But positive self-delusion can also lead to faulty assessments, unrealistic expectations, and hazardous decisions, according to the study—making it a mystery why overconfidence remains a key human trait despite thousands of years of natural selection, which typically weeds out harmful traits over generations.

Now, new computer simulations show that a false sense of optimism, whether when deciding to go to war or investing in a new stock, can often improve your chances of winning.

"There hasn't been a good explanation for why we are overconfident, and this new model offers a kind of evolutionary logic for that," Johnson said.

"It's unlikely to be an accident—we're perhaps overconfident for a good reason."

Overconfidence Pays Off When Costs Are Low

Johnson and colleague James Fowler, of the University of California, San Diego, developed a model using evolutionary game theory to explore how individuals with different strategies perform in competition with each other.

In the model two imaginary individuals, X and Y, stake claims for resources. If both claim the resource and fight over it, the stronger individual wins and gains the resource. Both individuals pay a cost for fighting over it. If only one claims the resource, he gets it for free. If neither claims it, neither gets anything.

Johnson also noted two important twists: The virtual competitors may either overestimate or underestimate their real strength. Secondly, there may be uncertainty, or a degree of error in how a competitor perceives his opponents' strength.

Based on these factors, a person then "decides" whether or not to claim the resource, while risking a fight if the other individual also claims it. They base their decision on their own perceived strength compared with how strong they believe their opponent to be.

"The beauty of the model is it captures a lot of types of human competition," said Johnson, whether it's arguing a court case or fighting over resources such as territory.

The team ran simulations over thousands of generations with individuals who had varying levels of overconfidence and varying levels of error in their assessments of others, and observed which strategies were effective. As with physical evolution, advantageous strategies "survived"—or were naturally selected—and were passed down to the next generation.

The results, published today in the journal Nature, showed that overconfidence pays off only when there is uncertainty about opponents' real strengths, and when the benefits of the prize at stake is sufficiently larger than the costs.

"So let's say you and I are fighting over some resource," Johnson said. "As long as there is some uncertainty about the outcome and the resource is valuable compared with the costs incurred in fighting for it, then overconfidence is the best strategy."

For instance, if people are fighting over an island with oil reserves, the benefit of accessing the oil might be a hundred billion dollars, while the costs of the war might be ten billion.

But if "if the cost of conflict or competition is high, and all for a fairly worthless prize—you're much better off being cautious."

Daniel Blumstein, a behavioral biologist at the University of California, Los Angeles, said the study puts the notion of false optimism into context nicely.

The research "provides some justification for a common phenomenon—[that] in many [modern] situations, humans behave overconfidently, and this gets us into problems."

For instance, hubris might have contributed to the 2008 global market collapse and recent wars, including the 2003 Iraq invasion, study leader Johnson speculated.

In fact, the strategy, which developed in small-scale societies, may be less successful in highly developed and complex societies—"that's when overconfidence starts to go wrong," he said.

For example, being overconfident when making decisions such as whether to invade a distant land may amount to an "evolutionary mismatch."

Johnson compares the survival of overconfidence as a primary human trait to our outmoded cravings for high-calorie food—"a consequence of a preference that was useful to us in the past" when calories were scarce "but [that] goes wrong when there's a McDonald's on every corner."

According to Robert Trivers, an expert in social evolution at Rutgers University, overconfidence may have another benefit, at least for men.

Men tend to exhibit more false optimism than women, a trait that can help in their two traditional evolutionary roles: fighting rivals and courting women.

In both situations, men are partly evaluated by their degree of self-confidence, Trivers said. During a fight, for example, false bravado may make a foe back down.

And, after all, "there are few things that are more of a physical or romantic turnoff than if the other person has low self-esteem."
Posted by Robalini at Saturday, September 24, 2011