How to Build a Greener City

The question isn't an idle one. Urban populations around the world are expected to soar in the next 20 years, to five billion from more than three billion today. If the current rate of urbanization holds steady, cities will account for nearly three-quarters of the world's energy demand by 2030. Most of the increase will come in rapidly developing countries like China and India; China's cities alone will have to deliver water, housing, transportation and other services to 400 million additional urban dwellers by 2030.

So, cities aren't going to have be made a little greener; they're going to have to be rethought from the ground up. The goal: compact living environments that require less resources and that get the most out of the land, water and energy they do use.

"There's going to have to be new forms of energy, new ways of delivering energy and new forms of infrastructure," says Warren Karlenzig, president of Common Current, a consulting firm on sustainable cities based in San Anselmo, Calif. "All this will be necessary to allow cities to operate the way they do now."

It wasn't long ago that the idea of using "green" and "city" in the same sentence seemed absurd. Cities were considered a blight on the environment: energy-hogging, pollution-spewing, garbage-producing environmental hellholes. But in recent years, they've begun to be seen as models of green virtue. City dwellers tend to walk more and drive less than their suburban counterparts, and dense urban development encourages transit use. Apartment living generally means lower per-household energy use.

Building on these strengths, planners and developers are devising innovative solutions to meet urbanites' energy, water, transportation and sanitation needs well into the future.

Some improvements are fairly easy, such as switching to energy-efficient LED lighting in buildings and streetlights, or setting aside bike lanes and widening sidewalks to encourage alternatives to driving (although such moves aren't without political hazards, as a recent battle over bike lanes in New York shows). Others are more ambitious, requiring new construction or even an extensive rebuilding of city infrastructure—consider what is needed to add a second set of pipes for a water-reuse system.

Some of the most ambitious projects—and the greatest source of innovative ideas—are the dozens of "eco-city" developments in the works or on drawing boards around the world. Projects like the Songdo International Business District near Incheon, South Korea, are testing grounds for the latest in green technologies.

Of course, many of these initiatives can be expensive, with high up-front costs. Urban planners say savings from lower energy bills and other operational efficiencies can more than cover the added expenses, but the break-even point can be years out. Still, cities—unlike the average homeowner considering rooftop solar panels—can take a long view and make investments with a decades-long payback.

So, how can cities—old or new—take green to a new level? Here's a look at some of the ways.

District Heating In a typical office building, heating and cooling account for nearly two-thirds of total energy use. So an alternative to traditional electricity or natural-gas HVAC systems can go a long way toward making cities greener. One solution: tapping the excess heat produced by nearby utilities or industry. A network of pipes distributes the heat, which can be used for hot water, space heating and in absorption chillers to provide air conditioning in the summer. These district heating systems are considerably more efficient—capturing up to 90% of the available energy—than in-building boilers. And they can tap any number of heat sources, including high-efficiency natural-gas turbines, large-scale solar thermal systems, biomass incinerators or furnaces in a steel mill. Common in Europe, high-efficiency district heating systems are being used in South Korea's Songdo IBD and are in the plans for other eco-city developments.

Micro Wind Turbines
The giant windmills that dot the countryside aren't suitable for cities, where vibrations can rattle windows and the noise would be annoying. So developers are turning to microturbines. These small generators sit atop commercial or residential buildings and are designed to take advantage of the quirks of big-city wind patterns—lots of turbulence and frequent, sudden shifts in direction. The turbines are generally small, rated at one to three kilowatts each. But when installed in arrays and combined with high-efficiency solar panels, they can generate a large share of a building's energy needs, especially when the structure is equipped with a full set of energy-saving features. A handful of companies provide micro wind systems around the world, and the devices, while more expensive per kilowatt than bigger systems, have been installed at scores of locations, including PepsiCo Inc.'s Chicago office building.

Wind and solar power are notoriously fickle, producing more power than needed at some times and less than needed at others. A city that wants to rely on such intermittent sources needs to find a way to bank that power. One technique: pumped hydroelectric storage. When wind or solar power is plentiful, electricity is used to pump water to an upper reservoir; later, when power is needed, the water is allowed to flow downhill, turning turbines in the process. (The lakes have the added benefit as open-space landscaping.) Large-scale pumped-hydro systems are increasingly used for storing energy, and many isolated towns rely on small-scale micro hydro plants to generate electricity. Adding a pumped-storage capability isn't technically difficult, but it's expensive, especially on a small scale, and current technology generally requires a large "drop," or change in elevation to produce much power—though companies are working on lower-flow hydro turbines that can work in more level settings.

When it comes to transportation, dense urban areas like Manhattan already have an advantage over suburbs: By packing people, jobs and services close together, they reduce the need for many car trips and provide the density to support bus and transit services. Green-city planners do even more, designing streets so that walking is safe, convenient and interesting—with wide sidewalks, landscaping and abundant crosswalks—and providing separate designated bicycle lanes. Songdo's 1,500 acres are designed so that most shops, parks and transit stops can be reached in less than a 15-minute walk, and the city also has a 15-mile network of bike lanes. 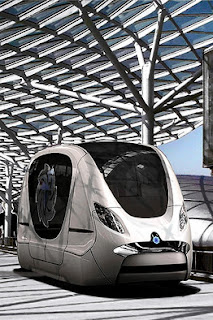 Not every urban trip can be made on foot, bicycle or public transit. Cities can encourage greener auto choices by providing electric-vehicle charging stations in parking garages. A futuristic solution: personal rapid transit, or PRT—pod-like, self-powered vehicles that can carry as many as six passengers. The vehicles can travel along dedicated roadways, like an automated airport transit system, or on streets equipped with buried magnets. There are no fixed schedules or routes; passengers pick their destinations, and a central computer guides the car without intermediate stops. Although still a novelty, PRTs are operating at Heathrow International Airport near London and at the Masdar Institute of Science and Technology in Masdar City, an eco-city development in Abu Dhabi. Masdar, however, has put on hold plans to deploy the pod cars throughout the entire planned two-square-mile development. 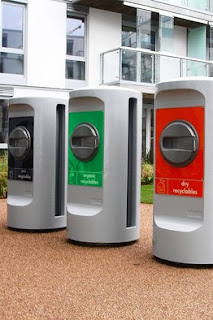 Even the greenest cities produce lots of garbage, which creates two problems: collecting the trash and getting rid of it. On the collection side, a centralized waste system, using an underground network of pneumatic tubes, can replace the fleets of trucks that block traffic, tear up streets and burn fossil fuels. The tubes can collect garbage from both households and outdoor trash bins and carry it to a centralized collection and sorting facility. Though some systems handle only food waste, others are set up to handle separate streams for paper and other recyclable trash. The systems are used in scores of cities world-wide; a pneumatic trash-collection system on New York's Roosevelt Island has been in operation since 1975.

Getting to zero waste is as important to cities as getting to zero carbon. This doesn't mean just encouraging residents to recycle—cities also can deploy technologies to tap the energy and other valuable resources buried in the trash. Advanced anaerobic digesters process organic garbage waste and the sludge left over from treating wastewater to produce biogas, which can be burned for energy; more common in Europe, the technology is just being deployed in the U.S. for handling municipal garbage. High-temperature plasma-arc gasifiers can consume nearly the entire waste stream, making a synthetic gas that is burned to produce electricity; the leftover slag can be used in building materials. One novel approach under consideration by the PlanIT Valley project, an eco-city development planned for northern Portugal: Aluminum cans are processed with water and energy, producing aluminum oxide and hydrogen, which can then be used to power fuel cells. But because aluminum oxide requires tremendous energy to make aluminum, it may be more economically feasible just to recycle aluminum containers.

Rooftops, which take up a fifth of urban surface area, can be used to support solar panels or wind turbines, but they're otherwise underutilized. Covering the tops of buildings with grasses, shrubs and other plants can deliver a host of benefits. Though often more costly than traditional coverings, green roofs can provide insulation and trim a building's heating and cooling needs. They absorb rainwater, reducing the load on storm-water systems, and filter what water does run off so it can be used for many domestic needs. They also filter air pollutants.

Mr. Totty is a news editor for The Journal Report in San Francisco. He can be reached at michael.totty@wsj.com.
Posted by Robalini at Saturday, September 17, 2011

Email ThisBlogThis!Share to TwitterShare to FacebookShare to Pinterest
Labels: Green