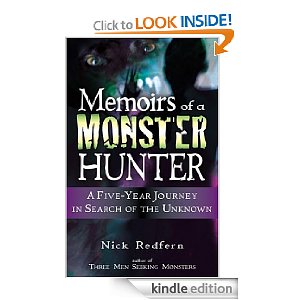 Memoirs of a Monster Hunter: A Five-Year Journey in Search of the Unknown
Nick Redfern (Author)

For centuries, people across the world have had a fascination with monsters and strange creatures. They marvel at the tales and legends of the Bigfoot of the Pacific Northwest; of the Abominable Snowman of the Himalayas; of the infamous and diabolical Moth-Man of West Virginia; of fire-breathing dragons; and of those dark denizens of the deep: lake monsters and sea serpents. But do such creatures really exist? Can it be true that our planet is home to fantastic beasts that lurk deep within its forests and waters? Memoirs of a Monster Hunter proves the answer is a resounding yes!

In this follow-up to his wildly successful Three Men Chasing Monsters, paranormal investigator and author Nick Redfern chronicles his surreal road-trip through the United States and beyond in search of all-things monstrous. His strange adventures lasted five years and saw him doggedly pursuing a menagerie of creatures, including gargoyles, giant birds, and what some believe are living dinosaurs. Follow Redfern as he:

* Explores the El Yunque rainforest of Puerto Rico in search of the terrifying Chupacabras: a razor-clawed, glowing-eyed beast that is part giant bat and part vampire.

* Seeks out the Goat Man: a menacing creature that evokes imagery of both demons and the fabled cloven-hoofed Centaurs of ancient mythology, and is said to inhabit the forests of East Texas.

* Chases after what many people believe are real-life, flesh-and-blood werewolves that surface from hidden lairs and prowl the countryside when the Moon is full.

Part X-Files, part Crocodile Hunter with a mix of Jurassic Park and Fear and Loathing in Las Vegas, Memoirs of a Monster Hunter takes you on a roller-coaster ride into the unknown. Read personal accounts of the monsters that inhabit your wildest imagination and your worst nightmares. The creatures you were told couldn't possibly exist, really do.

"This is one of the best books I've read in years. Redfern sweeps you away on his personal adventure. Around the world, from romance, to ghastly beasts, to the cosmos, Redfern has candidly shared the wonders of his young life."

--Joshua P. Warren, author of Pet Ghosts and How to Hunt Ghosts

Nick Redfern is a full-time author and journalist specializing in a wide range of unsolved mysteries, including Bigfoot, the Loch Ness Monster, UFO sightings, government conspiracies, alien abductions, and paranormal phenomena. He writes regularly for the Daily Express newspaper, Fortean Times, FATE, and UFO Magazine. His previous books include Three Men Seeking Monsters, Strange Secrets, Cosmic Crashes, and The FBI Files. Among his many exploits, Redfern has investigated reports of lake monsters in Scotland, vampires in Puerto Rico, werewolves in England, aliens in Mexico, and sea serpents in the United States. Redfern travels and lectures extensively around the world. Originally from England, he currently lives in Dallas, Texas.