Men And The Monsters They (Allegedly) Made 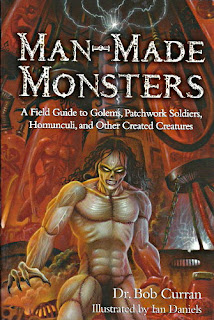 Almost every conspiracy theory smears the Masons with some sort of shadowy evil. In the book, Man-Made Monsters by Dr. Bob Curran (2011), that apparently harmless fraternal order is tied in with the artifical creation of life.

What kind of life? Take a look at the book's sub-title: A Field Guide to Golems, Patchwork Soldiers, Homunculi, and Other Created Creatures. So we're not talking about cute little beings like Smurfs or Teletubbies.

The author doesn't buy in to all the negative stories told about the Freemasons, especially the one that says the Masons inherited the secret of artificial life from the Knights Templar. Dr. Curran only describes the tales, questionable records and urban legends he encountered when researching his work. The book is categorized as Paranormal/Mythology which the emphasis on the mythology part.

Back in year 1119 the Templars were founded in the Holy Land just after the First Crusade. Apparently this military monastic order uncovered buried artifacts and documents from the Temple of Solomon, objects with mystical power such as scrolls written by Melchezidek, the legendary priest king of Salem. It was whispered the Templars used this power to create homunculi that they worshipped.

The reason for such stories is that some wanted the Templars destroyed. The Order was involved in early banking and amassed a great fortune. Besides religious enemies, such as rival orders, the Templars also had secular enemies, monarchs greatly in debt to them.

When a new pope came to power, there was an opportunity to portray the Templars as secret practitioners of witchcraft and other satanic acts. The order was accused of creating homunculi to act as spies, thieves and assassins. Under torture some Templars confessed to evil but improbable acts.

So what happened to the creatures created by the Templars?

Conspiracy theories surround Berenger Sauniere, the priest of Rennes-le-Chateua in Southern France who officially served from 1885 to 1909. Somehow this priest had access to all sorts of money, building many projects around the village. What was the source of his wealth?

Dr. Curran relates the tale that Sauniere found a Templar homunculus within his church and he sold it to the Vatican for a tidy sum. The creature is hidden somewhere in the Vatican.

And the Templars' mystical knowledge? 400 years after the downfall of the Templars the Freemasons rose to power, learning the secrets of Solomon's Temple, or so says the legend. The Masons kept the secrets in various lodges throughout the world. Dr. Curran observes:

"Hints and directions leading to such secrets were to be found not in hidden texts, but in the geometry and symmetry of Masonic building and ornamentation, and throughout the years here have been attempts by non-Masons to decode these and to discover what these supposed 'secrets' might be."

As far as I know no non-Mason has cracked the code.

But the Freemasons aren't the only secret society that is tied in with conspiracy and man-made monsters. Dr. Curran mentions rumors about Rosicrucianism, that some modern-day followers are secretly working for the government in stem-cell and cloning projects.

I don't think the government needs Rosicrucians on the payroll to create monsters. It does a fine job on its own.
Posted by Robalini at Saturday, September 24, 2011