Classic Cartoon of the Week: He-Man 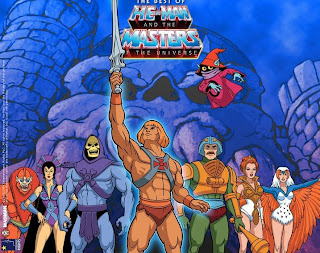 He-Man and the Masters of the Universe was one of the most popular cartoons of the 80’s, and with good reason. With what was probably the most successful merchandising tie-in ever, the series was watched religiously by children all over the world who could reach for their action figures as soon as the show was over.

He-Man was the alter ego of the handsome Prince Adam, ruler of the planet Eternia and overseer of Castle Greyskull, where the governing Council of Elders were housed. It was up to Prince Adam to protect the castle from danger, which usually meant threats from the evil Skeletor who thought that he should be the one to rule the planet.

In order to defend his people from Skeletor, Prince Adam would raise his sword in the air and shout, “By the power of Greyskull! I have the power!,” thus transforming into the mighty hero He-Man.

Like any good hero, He-Man had an array of friends to help him out when things got a little rough. Man-at-Arms served as his right-hand man and strategic adviser, and Teela, Man-at-Arms' warrior goddess adopted daughter, also lent an effective hand in battle. Other allies included the powerful Sorceress and Cringer, Prince Adam’s cowardly tiger, who transformed into the fierce Battle Cat when his owner became He-Man. He-Man’s sidekick, Orko, served a dual function, as a source for comic relief and a non-offensive outlet for the "moral of the story" messages at the end of every episode.

Eventually, Prince Adam’s sister, Princess Adora, would be introduced on a TV special and spun off to her own series, She-Ra, Princess of Power.

The series' overwhelming popularity was largely due to the easing of FCC regulations on advertisements in cartoons. Mattel was therefore able to share producing credit and market toys based on the series...as long as they didn’t advertise during the show itself. Eventually, even this rule would be lifted and the syndicated stations would advertise toys based on the cartoons that children had seen SAVING THE UNIVERSE only two seconds before.

The success of He-Man reached its peak with the live-action motion picture Masters of the Universe in 1987, with Dolph Lundgren as He-Man and veteran actor Frank Langella as Skeletor.
Posted by Robalini at Saturday, September 24, 2011

Email ThisBlogThis!Share to TwitterShare to FacebookShare to Pinterest
Labels: Retropedia