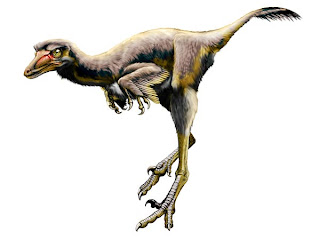 Talk about a lucky break — paleontologists have found "incredibly rare" fossils of a new species of raptor dinosaur that severely fractured its giant-clawed foot about 76 million years ago, paleontologists say.

The six-foot-long (two-meter-long) Talos sampsonsi lived in the rainy, "hothouse world" of late-Cretaceous North America, which was then two continents—Laramidia in the west and Appalachia in the east—divided by a shallow seaway.

It's one of the few troodontid theropods—small, birdlike predators—ever discovered in North America, said study leader Lindsay Zanno, a vertebrate paleontologist at the Field Museum of Natural History in Chicago.

Doctoral student Mike Knell, who found Talos while searching for fossil turtles in Utah in 2008, "stumbled across one of the nicest raptors that we've found in North America," she said.

"It was a thrilling discovery for those of us who got to work on it."

The dinosaur is named for the mythological Greek figure Talos—a winged figure that supposedly could run at lightning speed—as well as Utah paleontologist Scott Sampson.

Perhaps most exciting about Talos is its injured second toe, which has added to an existing debate on what troodontids did with the giant, sickle-like claw on that toe, study leader Zanno said.

Paleontologists have offered opposing explanations for the claw, for example that it helped troodontids climb, acted as a weapon in killing prey or fighting foes, or even enabled the dinosaur to clean itself.

When the scientists analyzed Talos's injured toe bone via a CT scanner, they found a mark that indicated that the injury—possibly caused by a bite from another animal—had been traumatic.

Assuming the dinosaur used the talon when walking, such a serious injury would've caused Talos to limp on that leg, which in turn would've caused obvious changes to the skeleton's structure, Zanno noted.

Instead, "we found the complete opposite," she said—the skeleton was otherwise unscathed.

This strengthens the theory that the raptor dinosaur carried its giant toe off the ground—an idea already supported by raptor tracks that lack claw marks, according to the study, published September 19 in the journal PLoS ONE.

Instead, Talos may have wielded its claw like a puncturing device when hunting, for example by getting a foothold as the raptor scrambled up a larger animal's back, Zanno said. Or, like some modern-day birds, the dinosaur may have used the claw as a weapon while fighting with other dinosaur rivals.

It's "giving us a window into the biology of the animal that we don't get from your average, everyday specimen," Zanno said.

The fact that the toe was traumatically injured at all suggests the dinosaur used it as a weapon, said Thomas R. Holtz, Jr., a vertebrate paleontologist at the University of Maryland, College Park.

Talos was "probably not going to get a wound like that from preening its feathers," said Holtz, who wasn't part of the study.

Based on the new findings and previous dinosaur tracks, Holtz suspects the dinosaur used its claw to pin down small animals and slash bigger prey.

What's more, the specimen's post-wound survival hints that the raptor was omnivorous, Holtz speculated. With its claw unusable for hunting, the dinosaur presumably had to eat plants or other foods to stay alive while it healed.

Holtz and colleagues have previously found that troodontids had teeth more like those of plant-eating reptiles than carnivorous ones, he added.

Study leader Zanno added, "In the end we can never observe the behavior of this animal—it's always going to be controversial."

But "the more individual lines of evidence that we can add that can support the [weapon] hypothesis, the stronger it becomes."
Posted by Robalini at Thursday, September 29, 2011