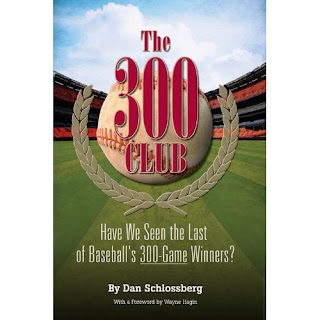 Robalini's Note: With Tim Wakefield having just reached 200 wins and Justin Verlander flirting with the possibility of 30 wins this year with a great playoff run, now is a good time to check out a book on the evolution (and possible extinction) of the 300-game winner...

Since the beginning of Major League Baseball in 1876, only two dozen pitchers have won 300 games. And because of new philosophies about pitch counts, the role of relief pitchers, shrinking strike zones, and five-man rotations, there's a good chance that the 300 Club has admitted its last member.

In The 300 Club - Last of a Breed - author Dan Schlossberg chronicles the most exclusive fraternity in baseball. Beginning with Cy Young and Walter Johnson, the only two players to win more than 400 games, the book reviews the careers of all 24 pitchers in the club. Exclusive interviews with 10 living 300-game winners, including Randy Johnson, Roger Clemens, and Greg Maddux, form the heart of the book. Johnson was the last pitcher to join the club, winning his 300th during the 2009 baseball season.

The book also investigates the very real possibility that no pitcher will win 300 games again. Changes in relief pitching, salaries, starting rotations, and injuries are conspiring to keep the 300 Club "closed." Sprinkled with rare photos from the archives of the Baseball Hall of Fame in Cooperstown, New York, this book explains how this unusual collection of 24 men managed to win so many games, and why other standouts, such as Bob Gibson, Don Drysdale, and Sandy Koufax, fell short of the magic number.

The 300 Club is about "the last of a breed," but the book is the first of its kind - a fast-paced and thorough exploration of the best pitchers the game has ever seen.