New Documentary of the Month: Smile 'Til It Hurts 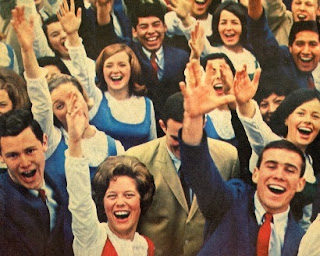 Before there were yuppies, there were uppies—the term Up With People members use to refer to themselves. Most Americans over the age of 35 are vaguely familiar with Up With People, as its cast members have sung to more than 20 million people worldwide, and at the height of the ensemble’s fame it provided the halftime entertainment at four Super Bowls (1976, 1980, ’82, ’86). But many are unaware of the group’s cultish utopian ideology, its political connectedness, and how it was funded by corporate America, part of a deliberate propaganda effort to discredit liberal counterculture in the 1960s and ’70s. In the documentary Smile ’Til It Hurts: The Up With People Story (Storey Vision), writer-director-producer Lee Storey provides a thorough, balanced look at the organization’s history, demonstrating “what can happen when ideology, money and groupthink converge to co-opt youthful idealism.”

Email ThisBlogThis!Share to TwitterShare to FacebookShare to Pinterest
Labels: Documentary