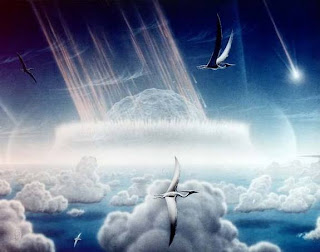 The source of the asteroid that killed off the dinosaurs 65 million years ago remains a mystery, a new study finds.

Some researchers had thought the deadly asteroid was a piece of a larger space rock called Baptistina. Baptistina broke apart after a massive in-space collision about 160 million years ago, the theory went, spawning a swarm of mountain-size chunks of rock. One of those eventually slammed into Earth, killing off the dinosaurs and many other species.

Scientists are confident that a 6-mile-wide (10-kilometer asteroid) is indeed what wiped out the dinosaurs. But new observations from NASA's Wide-field Infrared Survey Explorer (WISE) space telescope suggest the space rock didn't come from Baptistina.

The timing just isn't right, according to the new study....

Origin of Dinosaur-Killing Asteroid Is Still a Mystery
20 September 2011
http://www.space.com/13008-dinosaur-killing-asteroid-mystery-nasa.html
Posted by Robalini at Thursday, September 29, 2011