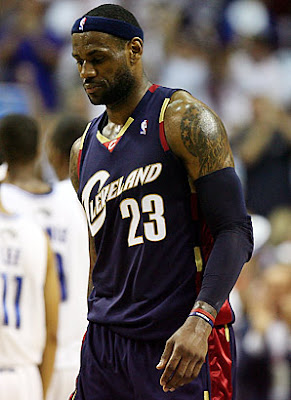 That was it? Seriously?

Given all the hype and secrecy and video-snatching tactics that surrounded it, you expected the world premiere of LeBron James Getting Dunked On to be something truly amazing, the type of vicious throwdown that makes you bug your eyes out and grab the person next to you in that All-Star weekend, you-better-hold-me-up-'cause-that-slam-was-so-nasty-I-just-might-pass-out kind of way. If the video of a little-known college player, Jordan Crawford of Xavier, jamming over James earlier this month was so embarrassing that LBJ or his Nike minions or both felt the need to confiscate the footage from one of the fans who happened to record it, surely this must have been a dunk for the ages.

The kid must have really posterized the King, you were thinking. He must have tied James' headband in a knot with the force of it. He must have finished a Sudoku as he soared over LeBron's head. He must have dissed LBJ's puppet commercials on the way to the rim. Something. Why else would they have gone to such trouble to try to ensure that the evidence would never leave the gym?

But no, it was just a run-of-the-mill dunk, the kind you might see in any high-level pick-up game. Crawford drove the middle and took off, with James leaving his man along the baseline to come and help. The King got there a split second too late to make the block, with Crawford finishing the flush just beyond his outstretched hand. There was some hooting and hollering from the handful of fans in the stands, but it died down soon enough.

And that's what would have happened with the public reaction if James and/or Nike hadn't tried to keep the footage from getting out -- it would have died down just as quickly. It's not completely clear whether James directed the Nike reps to confiscate the video or whether the idea came from the company, but in any case, he certainly made no objection. However it came about, they were dead wrong in their handling of it; they should have been shrewd enough to let matters play out naturally. Instead, they made everyone so curious that when footage finally hit the Internet on Wednesday -- apparently the Nike reps didn't realize that the fan they strong-armed wasn't the only one recording the play for posterity -- the entire basketball world was eager to take a look.

So the attempt to suppress the evidence was a miscalculation by James, which wouldn't be a big deal if it weren't his second misstep in recent weeks. The great dunk cover-up comes on the heels of his rather ungracious exit from the playoffs in late May, when he drew criticism for leaving the court after the Cavs' elimination without bothering to shake a single Orlando player's hand. Neither of these is a major offense, of course, but taken together, they do point to a troubling possibility. Could it be that LBJ, who had until now shown such unerring public relations instincts, is beginning to take himself too seriously?

Some diva tendencies are starting to show, first pouting after a big loss and now trying to suppress video that shows him as something less than a superman for about five seconds. It's a little like an actress who won't allow herself to be photographed unless her makeup is on and the lighting is perfect. It would be a shame to see James, who has been so appealing in part because he has seemed so natural and down-to-earth, turn into the kind of celebrity athlete who becomes so self-absorbed he can't handle defeat with grace or so image conscious he tries to micro-manage the flow of information about him that reaches the public.

As unfair as it may be to LBJ, we can't help think about what Michael Jordan would have done in the same situation. His Airness wouldn't have destroyed the dunking footage, he would have destroyed the dunker. He would have focused on outplaying Crawford so mercilessly for the rest of the game, and every game the youngster had the misfortune to play against him thereafter, that Crawford would rue the day he ever learned to dunk. Jordan's legacy was not that he never came up short, it was how ruthlessly he exacted revenge on those rare occasions that someone did get the better of him.

James would be wise to follow Jordan's lead -- among MJ's many talents, after all, was the ability to remain utterly likable without appearing to try too hard. It appeared that James had figured out how to do the same, but he seems to be in need of a refresher course, or at least a reminder that presenting yourself as a sore loser or a thin-skinned star is no way to keep the public on your side.

The occasional embarrassing moment on the court can't damage LeBron's reputation, but his own overreaction can. That much, James needs to realize, is a slam dunk.
Posted by Robalini at Wednesday, July 29, 2009

Great blog you got here. I'd like to read a bit more about that theme.
By the way look at the design I've made myself Russian escort

An Leaked Lady GaGa Single was Unwrapped this morning with no traces of where it was found.
Some say that it was leaked from GaGa's Record Label's headquarters.

It was certainly interesting for me to read that article. Thank you for it. I like such themes and anything that is connected to this matter. I would like to read a bit more on that blog soon.

It was certainly interesting for me to read that article. Thank you for it. I like such topics and everything connected to this matter. I would like to read a bit more on that blog soon.

Great blog you got here. I'd like to read something more concerning this matter. The only thing it would also be great to see on this blog is a few pics of some gizmos.

Pretty cool place you've got here. Thanx for it. I like such themes and anything that is connected to them. I definitely want to read more on that blog soon.