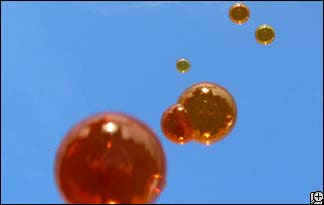 July 10, 2009 -- Shimmering with all the colors of the rainbow, bubbles are a joy to children young and old. For inventor Tim Kehoe, however, creating a bubble with a single color that won't stain when it pops has been a 15-year, $3-million obsession. Two weeks ago, the world's first colored, non-staining bubbles, Zubbles, went on sale.

A lot of people "said that you just can't color a bubble," said Kehoe, "which is discouraging when that is exactly what you are trying to do."

The use of bubbles for entertainment purposes was first recorded about 400 years ago. Today, bubbles are arguably the world's most popular toy, with more than 200 million bottles of bubble solution sold annually.

The simple chemistry of bubbles -- two layers of soap sandwiching a layer of water about a millionth of an inch thick -- has foiled virtually every attempt to modify them. Bubbles that last a little longer or can be blown a little bigger have since been created, but adding color, what some toy manufactures have called the "holy grail" of toys, has remained frustratingly elusive.

Standard food coloring or dyes have no effect; they simply run down the sides of the bubble, creating a drop of color on the bottom. Other dyes can stain bubbles, but when they pop they also stain clothes, dogs and eyes, as Kehoe discovered during one accident. Other tests, including one for a bubble dye that washed out, didn't fare much better.

"I thought a washable bubble was a great idea," said Kehoe. "But the kids (of a large focus group) were covered head to toe in red dye. It looked like a scene from Braveheart."

Eventually Kehoe and his colleagues found the three different classes of dyes that produce intense, vibrant and uniform colors. Originally, it took three days to produce what would eventually become Zubbles, but now it takes about 30 minutes.

Once a bubble pops, the dye fades in 15 minutes on virtually every material imaginable: concrete, leather, nylon, cotton and paint. Even easily stained material like silk remain unstained 15 minutes after a Zubble touches them.

Right now, consumers can only buy blue and pink bubbles, although Kehoe says that he can create bubbles of any color.

Kehoe won't say which dyes he specifically uses for the colored bubbles, but in a 2005 patent application Kehoe listed chemicals such as alkyl metal sulfate and polyether.

Kehoe also lists several other uses for the colored bubbles in the patent application, including plastics, soaps, shampoo and many others.

That's optimistic, says Cyril Isenberg, author of the The Science of Soap Films and Soap Bubbles and a professor at the University of Kent. Isenberg doesn't think that non-staining colored bubbles will have any market value outside of a child's toy.

Still, the children's toy market is a huge and lucrative one, and even if colored bubbles don't have the success of their iridescent cousins, it was time well spent to Kehoe.

"It's a good feeling after 15 years to see colored bubbles become reality," said Kehoe. "After eight years, you think, 'What am I doing this for?' but I am absolutely glad I stuck with it."
Posted by Robalini at Wednesday, July 15, 2009

Email ThisBlogThis!Share to TwitterShare to FacebookShare to Pinterest
Labels: Zubbles

I'd like to know what books you would recommend to someone who would like to make it in the forex business. I'd love to learn from experienced traders talking about their struggles in this very tough market.
[url=http://zitechlogic.com/blog/?p=33#comment-356339]best forex software[/url]