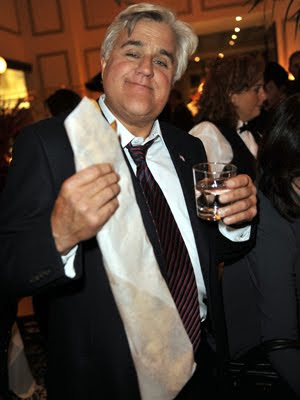 Every high school in America has its cool kids, the smart, snarky ones who sit in the prow of culture, and its dorks, the plodding if amiable ones who sit in the middle of the boat and try not to make waves. One needs to be reminded of this in assessing what was really at stake in the headline-making Leno-O'Brien war that ended Thursday with an agreement to pay $45 million to O'Brien and his staff.

Celebrities and critics are still taking sides -- the younger, hipper ones decrying how shabbily NBC had treated poor Conan; the older, statelier ones backing Leno -- giving us a clear demonstration of just how much this was a function not so much of money or ratings but of demographics. O'Brien and Leno stood across a cultural and generational divide: young vs. old, cool vs. uncool.

The origins of this battle actually go back to 2004 when NBC decided to boot Leno to the curb five years down the road and replace him with Conan O'Brien, 13 years Leno's junior, after Leno had been helming "The Tonight Show" for 17 years. Aside from Leno, no one seemed particularly startled by this succession, though it turned television logic on its head. Leno was drawing huge ratings, regularly beating the pants off of his CBS competition, David Letterman. By the time he left, he was attracting 5 million viewers a night, and "The Tonight Show" was one of NBC's most profitable franchises. And though Leno's ratings, like all ratings on broadcast television, had declined in his last year, he was still unassailable.

Which was precisely what NBC had expected when Leno took over "The Tonight Show" in 1992 after being tapped over Letterman. Everyone agreed then that Letterman was edgier than Leno, more iconoclastic, and, to a lot of people, funnier. Letterman wore the self-deprecating dork's mantle, but it was a ruse. He was the cool, droll kid who had reinvented late-night television, and NBC decided he might not be the best fit for the square "Tonight Show," where middle-American Johnny Carson had held forth for 30 years.

As it turned out, NBC was right. Leno had been an edgy -- and very funny -- comedian once, but he had gradually drifted to the center where the larger audience was. If that meant blunting his comedy, Leno was willing. By the time he took over "Tonight," Leno's basic commodity was not his humor, which had become toothless, but his likability. He was your grandmother's comedian -- the comedian of the Silent Majority.

Meanwhile, Conan O'Brien was handed Letterman's vacated spot after Leno. O'Brien had never been before the camera. He was a writer. But he was a great idea for a late-night show host: Harvard-educated, then trained at the writers' tables on "Saturday Night Live" and "The Simpsons." It didn't get any cooler than that. Even if he was as jittery as a nervous Chihuahua and milked his handful of jokes for everything they were worth by shameless mugging, he was young and different -- a hipster.

More important, he was the beneficiary of a sea change in television. Over the 16 years from O'Brien's first appearance on late night to his taking over "The Tonight Show," Leno didn't change his nice guy persona and O'Brien didn't get any more comfortable on stage. They remained pretty much the same. It was the culture that changed around them. And that's where demographics came in.

Few people alive today remember that television was once measured, reasonably, by how many people actually watched a particular program. You either had the most viewers or you didn't, and advertisers paid accordingly. The problem with this system was that year in and year out, actually 20 out of 21 years from 1955 through 1976, CBS got the highest ratings. ABC and NBC couldn't make a dent. So ABC, typically mired in third place, devised another strategy. It got the brilliant idea of finding a slice of the audience in which it could compete with CBS -- never mind that the choice was arbitrary. That's how ratings suddenly got divided into demographic segments -- which was like a football team saying that while it lost the game, it outscored its opponent in the third quarter and that ought to count for something. ABC boasted that it got younger viewers than CBS.

All of this is relevant to Leno and O'Brien because of the way ABC and NBC justified this magical and nonsensical confabulation. Younger viewers, they said, were better viewers. They were more susceptible to advertising blandishments. They were more likely to decide on a product and maintain loyalty to it for life. And they were harder to reach and therefore more desirable. Whatever the excuse, the result was that older viewers -- and old meant over 50 -- were suddenly worthless in television terms. Losing Conan O'Brien, should O'Brien have gotten restless and decided to leave NBC when his contract was up, wouldn't have been much of a loss on its face. Even if he had gone to Fox or syndication, there was no way he could have competed against Letterman, much less Leno. He would have been the Irish Arsenio.

But Conan was young and hip; and, astonishingly, he had over the years gotten increasingly favorable reviews and growing cachet, especially as Leno was denigrated by the press for having gone mainstream. O'Brien became a critical darling. Reversing the logic that had prompted it to reject Letterman, NBC apparently concluded that O'Brien was the pompadour of the future. If it lost him, it would lose his cool.

Leno, for all his ratings prowess, was just too square for NBC in the age of the almighty 18-to-34 demographic that everyone now lusted after. In a way, NBC, like an aging suitor, was addled by youth.

There was just one complication. Leno, unlike O'Brien, actually could take his Silent Majority elsewhere, uncool or not. When NBC at the eleventh hour offered Leno the 10 o'clock slot, it wasn't because it expected him to reap great ratings against dramatic shows or even because it wanted cheaper programming. It was a defensive maneuver to keep him from defecting to another network and demolishing O'Brien on "The Tonight Show," its cash cow. NBC didn't really want him, but it didn't want to have to compete against him either.

What NBC didn't seem to have reckoned was just how much its desire to play with the cool kids would cost them -- not in terms of ratings at 10 where it knew Leno would be swamped, but in the weak lead-ins to the local news that sparked an affiliate revolt and in sagging ratings for "The Tonight Show" itself. O'Brien's supporters may think he is the neatest kid in class and that he is therefore entitled to occupy the host's chair, but he is pulling half the ratings Leno got and recently is even down from Leno in the coveted demo. And O'Brien isn't doing any better than Letterman.

In his defense, O'Brien claimed he needed time to build his audience, though detractors could parry that he had 17 years to build an audience. Put less charitably, O'Brien may have been modish, but he wasn't funny.

But this was never about funny -- if it was, neither O'Brien nor Leno would have inherited "The Tonight Show." This was about image. In the great high school of life, NBC opted to follow the siren call of cool. And now, for what may be the first time since 18 to 49 became the American grail, the system has blown up, so much so that NBC was willing to pay O'Brien tens of millions of dollars just to get rid of him and restore Leno to "Tonight."

And that is the real significance of the Leno/O'Brien smackdown. Say what you will about Leno, his return is a cultural milestone.

As O'Brien faded into the evening last night with bundles of cash and newfound martyrdom, the baby boomers have finally gotten some small measure of revenge, however old and dorky and undesirable they may be.
Posted by Robalini at Friday, January 29, 2010

What a great resource!