Dennis Hopper was the most visionary of all Hollywood bad boys 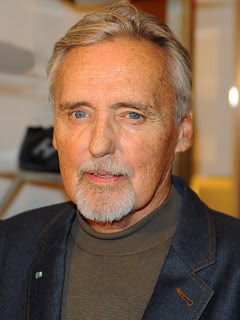 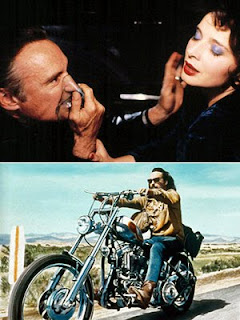 May 29, 2010
Dennis Hopper was the most visionary of all Hollywood bad boys
Owen Gleiberman

In a world of fake bad boys, he was the true article — a natural-born rule breaker, a Hollywood rebel who took midnight rides on the wild side with James Dean, a scraggly-haired hippie too hip (and too dark) to let the sunshine in. Dennis Hopper, who died Saturday at 74, was an actor and a filmmaker who tore through boundaries not just because he didn’t like them; most often, he didn’t even see them. I’ll never forget the one time I got to be in a room with him. It was August 1979, at the Saturday morning press conference after the very first American showing of Apocalypse Now. The screening had taken place the night before, at the Ziegfeld Theatre in Manhattan. I was a bratty college journalist who’d squeezed my way in and was still reeling from the movie: its hallucinatory power and majesty and violent strangeness. (The “Ride of the Valkyries” sequence was so indelible that it kept popping back into your mind’s eye, like your very own searing cinematic Vietnam flashback.)

At the press conference, they were mostly all there, the maverick artists who had toiled away on this movie for half a decade: Francis Ford Coppola, who took the opportunity to make his first feverish pronouncements on the brave new world of technology we were all about to enter (he called it “the communications revolution,” and though few knew what he was talking about, 30 years later, it’s clear that he was right); Robert Duvall and Martin Sheen, the latter of whom had priceless tales of working with the elephantine and eccentric Marlon Brando (who, naturally, hadn’t bothered to show up to talk to a bunch of journalists); and Hopper, who instantly took on the role of flaked-out druggie court jester of the press conference. The more stonerish and cosmic, and the less coherent, he was, the more that he ended up dominating the questions and answers, cracking up everyone in the room, though whether we were laughing with him or at him was, by the end, an open question.

To this day, I have no idea if he was actually high, but it almost didn’t matter: His rambling declarations on everything from filmmaking to the state of America made it sound as if he had never quite stopped playing the jittery, blitzed-out-of-his-noggin, war-fragged photojournalist in Apocalypse Now. Or, just maybe, that his performance in the movie wasn’t really a performance at all. There’s no denying that Dennis Hopper made himself a bit of a joke that day. Listening to him was like looking at the last joint ash of the ’60s, hanging in the air and ready to fall. At the same time, you couldn’t take your eyes off him. He was a court jester and a train wreck, and he was also every inch a star. In his very dissolution, he played his own legend like a bad-trip virtuoso.

Image Credit: Luca Ghidoni/Getty ImagesThe thing is, even his drugged-out fall from grace only served, in the end, to set up one of the greatest acting comeback/triumphs in the history of Hollywood. Seven years later, in what would be — in my view, at least — the single greatest film of the 1980s, David Lynch’s Blue Velvet, Hopper gave a performance that was more than “dark” and “scary” and “creepy” and all the other words that you could appropriately hurl at it. He gave a performance that shocked audiences with its down-to-the-bone knowledge of evil. Hopper’s Frank Booth still showed the actor’s 1950s roots. He was a greaser out of your nightmares, a delinquent all grown up into a dirty old daddy-uncle. But when he pulled out that drug canister, snapped on the gas mask, and began to inhale, we saw what he had curdled into — a man out of period, a true modern monster, not just an addict but the ultimate addict, a guy who got high on things we had no idea of, because somewhere along the way, he had gone that far past being able to get pleasure out of normal pleasure. Frank Booth was a ’50s nightmare meets ’60s nightmare turned very ’80s nightmare: a gothic pervert sadist hooligan whose spirit whispered to the hero, “You’re just like me!” And so, on some level, that’s what Hopper (and Lynch) were whispering to the audience, too.

Those are frightening thoughts, to be sure, but when Dennis Hopper talks in Blue Velvet, with that melodious snarl, he’s not just a walking menace, a guy who’s going to get in your dreams and stay there. He’s a villain with his own bad dreams, a terrifyingly grown-up greaser-psychotic who has become enslaved to his demons — his drug canister — and adores them all the more for that reason. Hopper didn’t just make himself into a small-town underworld boogie man. He laid himself bare on screen, fusing his own dark side with that of the character, the way Brando did it in Last Tango in Paris. Hopper’s performance is an electric bolt of malevolence shot straight from the soul. It was the catharsis his whole career had been building toward.

Of course, Dennis Hopper really had two careers. He was an actor who became a filmmaker, and what you see when you look at the movies he directed is extraordinary promise, embodied in one fresh blast of organic brilliance, and then a great deal of colorful fallout. Easy Rider, the two-hippies-on-a-ride-to-find-the-real-America chopper odyssey he directed in 1969, is not only, along with Bonnie and Clyde, the formative film of the New Hollywood. It’s a movie that stands the test of time in exactly the way that a drama about two rambling longhairs out to find freedom on the highway should not.

Watch Easy Rider today, and you’ll see that every glinting panoramic shot, every toked-up dialogue rhythm, every situation and jagged dramatic back-alley dovetails as only the work of a born filmmaker can. Hopper, who was in his late teens when he made his screen debut in Rebel Without a Cause (1955), came of age in the outwardly strait-laced, buttoned-down Hollywood of the 1950s, but as a compatriot of the moody, emotionally voluptuous (and bisexual) James Dean, he was already writing the first chapter of the revolution that was to come. When he got the chance to make Easy Rider, he poured a decade’s worth of desire, liberation, nihilism, despair, and hunger into it, and the freedom of the movie is there in every image. It’s there in the air of discovery that the characters breathe. As an artist, Hopper showed the instinctive sophistication to portray himself and Peter Fonda, the two scruffed-out hippie-biker antiheroes, not just as crusaders but as tragicomic fools. I first saw Easy Rider when I was 11 (it was the first adult movie I ever snuck into), and the end of the movie — that falling-away roadside-crash helicopter’s-eye death shot that you realize has already been glimpsed in an acid hallucination — spooked and possessed me like nothing I had ever seen. This wasn’t just a trendy youth-drug-culture movie. It was filmmaking on drugs.

At that point, having kicked the door of the New Hollywood wide open, Dennis Hopper could have written his own ticket. And he did — by quickly flaming out and writing a ticket to oblivion. Hopper had a singular knack for mythologizing himself, and two years after Easy Rider, when he entitled his followup effort The Last Movie (1971), it was an invitation to the counterculture audience to see it as the product of a system that was already breaking down. A hodgepodge of native-chic message mongering, psychodramatic dithering, and apocalypse…wow! indulgence, all shot in Peru, The Last Movie was Hopper, in effect, trashing the Hollywood-meets-the-new-youth-generation alliance that he had helped to bring about.

There’s a whole cachet surrounding The Last Movie — that it’s a flawed “visionary” work, too pure and daring for the system that had allowed it to be (so the system, therefore, couldn’t allow it to be). But I had a rare chance to watch it on the big screen in the late ’80s, and the movie I saw was, frankly, a borderline unwatchable mess: images strung together with haphazard abandon, and Hopper treating himself as an icon who no longer wanted to bother being an actor. The Last Movie is a real messianic-complex disaster, like the films Alex Cox made right after Sid & Nancy. The movie’s “lastness” signifies nothing — except, perhaps, Dennis Hopper’s withdrawal from the world of moviemaking. There’s one moment of oddball fascination, though: Making love under a waterfall (or, at least, that’s my memory of it), Hopper spills forth some of the same queasy noises of horny torment that he does in the sadomasochistic sex scenes of Blue Velvet. Which makes you wonder how much of Frank Booth he really did pull out of himself.

Ultimately rejoining the world, and the system, Hopper directed a couple of pretty good films: the end-of-the-’70s curio Out of the Blue (1980) and, of course, Colors (1988), the L.A. cop drama to which he brought a real grit and flash and tumultuous atmosphere, guiding Sean Penn and Robert Duvall through some of their most likable Method-lite fireworks. He played some pretty cool wily and bug-eyed villains, too, notably in Speed (1994). Overall, though, it’s safe to say that he almost couldn’t help but drift back to playing the role he knew best: that of Dennis Hopper, visionary-turned-casualty-turned-survivor-of -the-’60s. Right to the end, in those Ameriprise boomer-retirement commercials (which are truly ingenious, with a subtext that says: If goddamn Dennis Hopper can plan for his future, than so can you!), he never lost his craggy-ghostly, fine-planed handsomeness, or the playful glee that so often animated his flights of stoner fancy. In Apocalypse Now, he’s actually quite brilliant, using his crackpot jabberiness as knowing, burnout comedy. As in all his best movies, whether behind or in front of the camera, he puts his demons right out there, as if to conquer them by exposing them, and for that, he’ll always be an artist on the side of the angels.
Posted by Robalini at Wednesday, June 09, 2010