Confessions of a Raving, Unconfined Nut 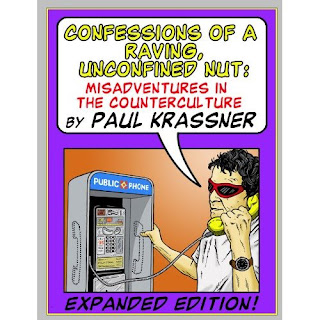 Confessions of a Raving, Unconfined Nut:
Misadventures in the Counterculture
by Paul Krassner — New Expanded Edition
– for $22 (plus $3 S&H)

“Krassner has the uncanny ability to alter your perceptions permanently.”
— Los Angeles Times

“Wickedly funny... Chillingly funny... A convincing look at a man who knows how to wield absurdity.”
— San Francisco Chronicle

“Krassner is one of the best minds of his generation to be destroyed by madness, starving, hysterical, naked — but mainly hysterical. His true wacky, wackily true autobiography is the definitive book on the sixties.”
— Art Spiegelman

“Paul¹s own writing, in particular, seemed daring and adventurous to me; it took big chances and made important arguments in relentlessly funny ways. I felt, down deep, that maybe I had some of that in me, too; that maybe I could be using my skills to better express my beliefs. The Realist was the inspiration that kept pushing me to the next level; there was no way I could continue reading it and remain the same.”
— George Carlin

“He is an expert at ferreting out hypocrisy and absurdism from the more solemn crannies of American culture.”
— New York Times

“Krassner lives in a world where Truth and Satire are swingers, changing partners so often you never know who belongs with whom.”
— Playboy

In December 2010, the writers’ organization PEN presented Paul Krassner with their Lifetime Achievement Award. This expanded edition of his autobiography — Confessions of a Raving, Unconfined Nut: Misadventures in the Counterculture — provides the reasons for that honor.

He published a groundbreaking satirical magazine, The Realist, from 1958 to 1974, and reincarnated it as a newsletter in 1985. “The taboos may have changed,” he wrote, “but irreverence is still our only sacred cow.” When People magazine called Krassner “Father of the underground press,” he immediately demanded a paternity test. The final issue was published in Spring 2001. All the issues are online at The Realist Archive Project.

His style of personal journalism constantly blurred the line between observer and participant. He interviewed a doctor who performed abortions when it was illegal; Krassner then ran an underground abortion referral service. He covered the antiwar movement; then co-founded the Yippies with Abbie Hoffman and Jerry Rubin (writing a few animated re-enactment scenes for the documentary Chicago 10 four decades later). He published material on the psychedelic revolution; then took LSD with Tim Leary, Ram Dass and Ken Kesey, later accompanying Groucho Marx on his first and only acid trip.

In Confessions, you’ll read about his friendship with controversial comic Lenny Bruce, his association with Hustler publisher Larry Flynt, and his investigation of Scientology and Charles Manson. There’s an entire chapter, “The Parts Left Out of the Kennedy Book,” about his most notorious article.

Tom Robbins: “Thanks to Paul Krassner for continuing to be the lobster claw in the tuna casserole of modern America.”

Arianna Huffington: “Paul Krassner–confidant of Lenny Bruce, co-founder of the Yippies, defiler of Disney characters, publisher of The Realist, investigative satirist extraordinaire--as soon as we decided to create the Huffington Post, I knew I wanted Paul involved. His irreverence was just what the blog doctor ordered.”

Kurt Vonnegut: “I told Krassner one time that his writings made me hopeful. He found this an odd compliment to offer a satirist. I explained that he made supposedly serious matters seem ridiculous, and that this inspired many of his readers to decide for themselves what was ridiculous and what was not. Knowing that there were people doing that, better late than never, made me optimistic.”

Lewis Black: “I have been a fan of his since I was a snot-nosed kid, and his words have been a driving force and influence on my life. If you have read his work before, you know the joys that you are in for. If you haven’t, start reading, and consider this your lucky day. For Paul Krassner is an activist, a philosopher, a lunatic and a saint, but most of all he is funny.”

On the other hand, a couple of FBI agents went to one of his stand-up performances and stated in their report, “He purported to be humorous about government policies.” His FBI files indicate that after Life magazine published a favorable profile of him, the FBI sent a poison-pen letter to the editor, complaining: “To classify Krassner as a social rebel is far too cute. He’s a nut, a raving, unconfined nut.”

In May 2004, he received an ACLU Uppie (Upton Sinclair) Award for dedication to freedom of expression. At the 14th annual Cannabis Cup in Amsterdam, Paul Krassner was inducted into the Counterculture Hall of Fame -- “my ambition,” he claims, “since I was three years old.”