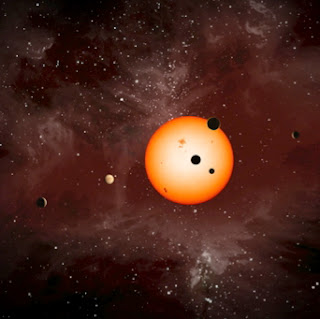 Thirty million kilometers away, trailing the pale blue dot that is Earth as it orbits the sun, is a spacecraft designed to find some of the countless other pale blue dots that may speckle the galaxy. NASA launched this spacecraft, known as Kepler, in 2009 to take a census of Earth-like planets in the hopes of figuring out how common—or how rare—are the conditions under which life has thrived here.

Just over halfway into that 3.5-year campaign, Kepler has not been on the job long enough to conclusively identify any habitable worlds, but its discoveries are growing ever more tantalizing. In a field where small is good—small meaning less like Jupiter and more like Earth—the latest batch of planets netted by the space observatory includes five of the eight smallest worlds now known outside the solar system. All five of the new extrasolar planets, or exoplanets, as well as one more world whose properties are not yet fully understood, orbit a sunlike star called Kepler 11, some 2,000 light-years away. A group of researchers announced the discovery of the six-planet Kepler 11 system in the February 3 issue of Nature. (Scientific American is part of Nature Publishing Group.)

Almost simultaneously, the Kepler team was preparing a list of more than 1,200 additional objects the spacecraft has located that may also be planets. "We have a huge number of candidates," says Kepler's principal investigator, Bill Borucki of NASA Ames Research Center, Moffett Field, Calif. "It's very exhilarating," says Borucki, who first put forth the idea for Kepler in 1984 and proposed the concept several times before getting NASA's approval and funding. The data on the numerous candidates are somewhat preliminary and require validation, but a new analysis by a pair of astrophysicists at the California Institute of Technology suggests that the percentage of false positives among Kepler's candidate planets may be less than 10 percent.

If that is the case, then Kepler is well on its way to vastly augmenting the roster of known exoplanets, of which there are now 500 or so, and may have already gotten a whiff of several potentially habitable worlds. "We have 54 planets in the habitable zone of their stars," Borucki says, referring to the temperate orbital zone around a star that would allow for the existence of liquid water on a planet. "One of them is 0.9 times the radius of the Earth, and four of them are less than two Earth radii." Any of those would be the most Earth-like world ever detected outside the solar system. What is more, some of the larger, more Jupiter-like planets Kepler is sniffing at in the habitable zone might have moons, and some of those satellites would themselves be potentially habitable. "It's sort of awesome," Borucki says of Kepler's haul. "The implications are that there are an awful lot of planets out there."