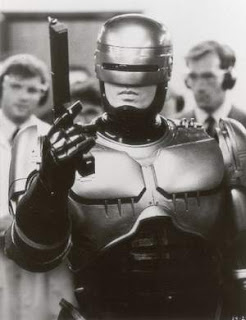 Is there a better way to revitalize Detroit than to make a statue celebrating a human-slaying cyborg cop? Nope.

From the Detroit Free Press:

Just six days after raising donations on the Internet, a group of local artists and fans of the 1987 cult classic exceeded the fund-raising goal of $50,000 this morning to build a larger-than-life sculpture of the crime-fighting cyborg.

With 1,500 donations and hundreds pouring in every day at www.detroitneedsrobocop.com, the group plans to continue raising money until the March 29 deadline to make the statue of "as big and good as possible," said Detroit artist Jerry Paffendorf, who is helping raise donations.

"This could be a multi-hundred-thousand-dollar KickStarter," Paffendorf said, referring to the online service hub for ideas looking for funding. "It's remarkable."

The statue has set off debates about the artistic value of a RoboCop statue. Some complain that the movie, about a dystopian, crime-ridden Detroit, would hurt the city's image.

Others said it's a fun way to bring more attention to the struggling, but resilient city...

Email ThisBlogThis!Share to TwitterShare to FacebookShare to Pinterest
Labels: Detroit