Unemployment Drops, but Where's the Jobs?

The good news: for the second straight month, unemployment dropped by 0.4 percent, to 9.0 percent in January. The bad news: only 36,000 jobs were created during the month.

One explanation for this bipolar employment message is a statistical glitch. Job creation and unemployment come from two different reports, and unemployment figures tend to be the more consistently accurate report. 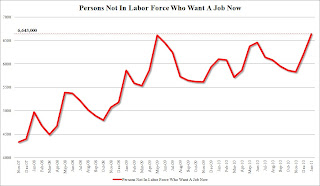 Another explanation, more cynical in outlook, is that unemployment is merely dropping because workers have given up looking due to the bad job outlook. This view is echoed by the poster with the clever pen-name of Tyler Durden for ZeroHedge.com: "Probably the last chart to bury any doubt about just how truly horrible today's employment data was, comes from a little observed data metric: that showing the number of people who are not in the labor force, but who want a job now. The number just hit 6,643K, a jump of 431K from December, and the highest number in history. These are people that would send the unemployment rate to about 12.8% if they were in the labor force (and, as indicated, looking for a job). Nothing else needs to be said."

Of course, even if the unemployment reports show a phantom drop, psychologically, it doesn't hurt. It's definitely a plus for Team Obama, as they no longer have to hear about unemployment stuck around double digits anymore...

Email ThisBlogThis!Share to TwitterShare to FacebookShare to Pinterest
Labels: Unemployment