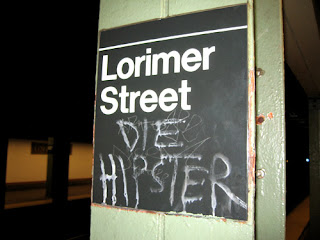 (editor's note: I wrote this after a recent trip to Minneapolis, where the hipster reigns supreme)

What could be more loathsome than that reprehensible bastion of the 80's AKA yuppies? Why hipsters of course-a mutant blend of both yuppies and hippies, conjured up by none other than psychopathic Madison Avenue brujos trying to outdo defense companies in the creation of the most effective and devastating weapons against humanity. What makes hipsters so worthy of our contempt is their hereditary hollowness-truly a marketing, if not genetic triumph far beyond the Grunge phenomena of the 90s. What is so menacing at the heart of all this is the pervasive influence hipsters have on everything from music to politics. Their marketing clout cannot be ignored. One only needs to look at how mediocre so-called "independent" publishers have become who have no choice but to cave in to their trend-a-minute demands. The same goes for music, art and literature as well because whatever enters into the hipster's perceptual field, whether it be a Beethoven sonata or a painting by Velasquez becomes instantly devalued-forever flat lined, no matter how vibrant and life sustaining they once were. In light of this instinctual desire to deaden everything, the hipster is responsible for the annihilation of culture on a global scale.

Hipsterism is an infectious disease rampantly spreading and no one is fully immune from its effects. It has contaminated life on a pandemic scale. As an example, I was in Spain in '08 to give a talk on my work and an audience member told me afterward that the literary references I had made ( esp. to Ortega y Gasset's work The Revolt of the Masses ) would not be understood because the young people in Spain didn't read that kind of stuff anymore. Interestingly enough, I found myself pleading with the young audience at the beginning of my talk not to get sucked into the corporate vacuum cleaner like Americans and to value their culture and heritage. Obviously, my admonitions fell on deaf ears.

In the heart of the hipster lies a glib savagery. The hipster reflexively will consider you in a way that makes you feel like you're being scanned by something not quite human. If the hipster cannot find vulnerabilities to take advantage of, they will move onto the next available prey at hand. All this happens within a mere two or 3 seconds time. There's a kind of predatory absolute in their hearts, which is understandable, considering that it is required for their game- of- chess approach to life. The hipster will do anything whatsoever to checkmate you. Usually this is done with a cold and calculating stare or empty promises they never intend to fulfill in the first place or even bragging in an unsolicited way about their salaries while savoring Rotted Cod, Smoking Loon or some other fashionable wine. Yet, most tragic is how the hipster has virtually zero respect for their elders and the riches of wisdom and experience they possess. Rather, a golden ager's bank account and whether or not they drive a hybrid Toyota Prius matter the most. Personally, I have experienced this with the 20 something crowd who cannot even give even a modicum of thanks for what they get. Expressing gratitude is beneath the hipster and they have no qualms letting you know this. At first I thought this was anomalous behavior but soon found out that, sadly, it is the across the board norm. One hand does not, nor will it ever, wash the other with the hipster crowd.

It is pitiful that hipsters have no ability to discern how they are being manipulated by the corporate powers that created them in the first place. At least yuppies were fully aware that they were materialistic, money grubbing slimeballs. However, hipsters are unconsciously deft when it comes to camoflauging this trait-primarily through their perpetual fixation on whatever trend they are prompted to follow-whether it be drinking Hamm's beer out of a can, which, over thirty years ago was the blue collar worker's only means of salvation at the end of the day, to listening to Coldplay while drafting up their plans to re-model their condos to in order to one up their next door neighbors. ( a contractor I talked to in Minneapolis told me that he made a lot of money by catering to hipsters who he could convince that replacing their marble counter tops with concrete was the in thing to do amongst other ploys.)

Hipsters are not going to go away any time soon considering the enormous influence they have on everything from Hollywood to interpersonal relationships. One suggestion I have for the Lava Cocktail reader is to work on heightening your awareness of their inherent manipulative abilities and protect yourself as best you can from their detrimental glitz, otherwise you will compromise your own humaneness in a way that will be most difficult to rectify. In fact, you may very well become one of them if you don't do this, no matter how old you are.
Posted by Robalini at Wednesday, February 23, 2011