Weiner of the Year: Depression Dog 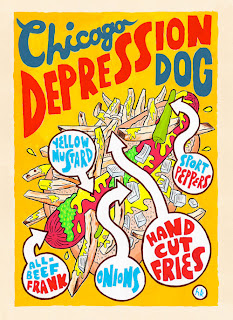 Meanwhile, SeriousEats.com teamed up with Rachel Ray to come up with the best hot dog in America, and the winner was the Depression Dog from Gene & Jude's.  Here's how SeriousEats.com describes the tasty meal: 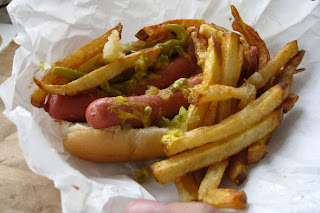 "A Depression Dog features a regular-sized (eight per pound) natural casing all-beef frank instead of the jumbo (six per pound) dogs that often come on a standard Chicago dog. Steamed and served on a plain hot dog bun--no poppy seeds here--garnished with yellow mustard, onions, hot sport peppers, maybe some relish and always served with a giant mound of fresh cut, skin-on fries, either wrapped up with the hot dog or simply piled on top. Absolutely no pickles, giant slices of tomato, cucumber, lettuce, celery seed or ketchup.

In fact, Gene's & Jude's, probably the most well-known purveyor of the Depression Dog, doesn't even allow ketchup for the french fries. This might well be the birthplace of the anti-ketchup sentiment, along with Clint Eastwood's line in Dirty Harry about how ketchup on hot dogs is worse than crime and murder."

Email ThisBlogThis!Share to TwitterShare to FacebookShare to Pinterest
Labels: Chicago