http://www.gizmag.com/ is among the best Websites for reporting science & tech news. Here's some recent great pieces: 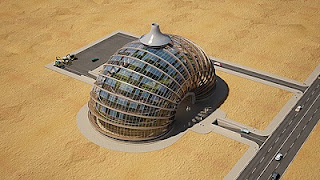 "Russian architectural firm Remistudio has taken the concept of a man-made biosphere and gone to sea with its vision for the floating 'Ark Hotel.' Designed to withstand floods, tidal waves and rising ocean levels as well as earthquakes and other natural disasters, the hotel concept would float and function independently on the surface of a body of water, providing a green, self-sustaining environment for guests who presumably, would never have to leave. 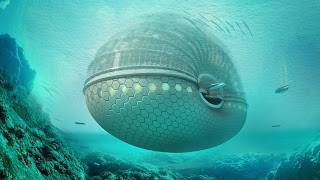 The shell-inspired Ark design has a load-bearing system of arches and cables which maintain an even weight distribution to withstand earthquakes, whilst the prefabricated frame allows for a fast and easy construction. 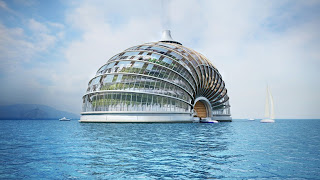 The internal garden provides a lush escape for guests by acting as a greenhouse and enough daylight is filtered throughout the internal rooms to reduce the need for lighting. 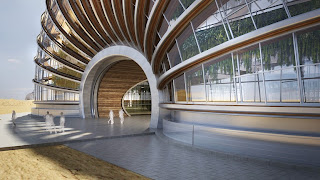 The design also integrates photovoltaic solar cells, a rainwater collection system and a frame that is protected with layer of self-cleaning and recyclable ethyltetrafluoroethylene (ETFE) – the same material used in the Beijing National Aquatic Center..." 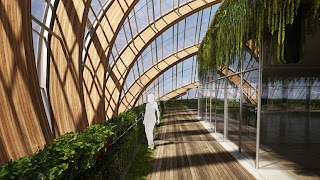 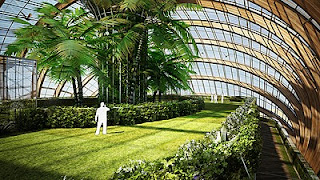 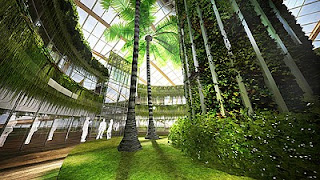 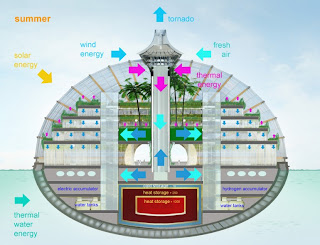 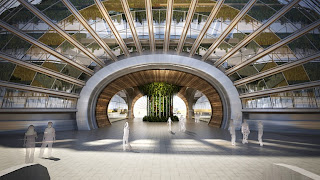 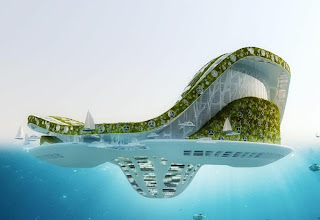 "With global sea levels predicted to rise significantly over the next century due to climate change, a lot of people living in low lying areas are expected to be displaced from their homes. Architect Vincent Callebaut has come up with a possible relocation destination for these climate change refugees in the form of the 'Lilypad' concept – a completely self-sufficient floating city that would accommodate up to 50,000. 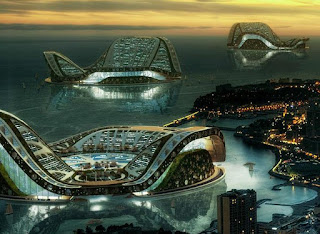 With a shape inspired by the highly ribbed leaf of Victoria water lilies, the double skin of the floating 'ecopolis' would be made of polyester fibers covered by a layer of titanium dioxide (TiO2), which would react with ultraviolet rays and absorb atmospheric pollution via a photocatalytic effect in the same way as the air-purifying concrete and paving stones we looked at last year. Three marinas and three mountains would surround a centrally located artificial lagoon that is totally immersed below the water line to act as ballast for the city. The three mountains and marinas would be dedicated to work, shopping and entertainment, respectively, while suspended gardens and aquaculture farms located below the water line would be used to grow food and biomass. 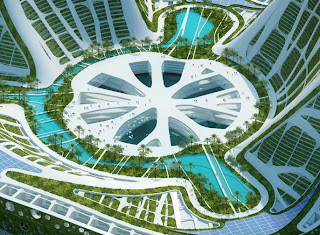 The floating city would also include the full complement of renewable energy technologies, including solar, thermal, wind, tidal, and biomass to produce more energy than it consumes. The Lilypads could be located close to land or set free to follow the ocean currents wherever they may lead..." 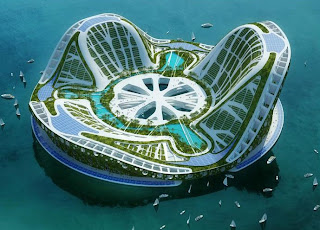 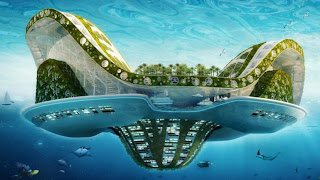 "UK-based Cella Energy has developed a synthetic fuel that could lead to US$1.50 per gallon gasoline. Apart from promising a future transportation fuel with a stable price regardless of oil prices, the fuel is hydrogen based and produces no carbon emissions when burned. The technology is based on complex hydrides, and has been developed over a four year top secret program at the prestigious Rutherford Appleton Laboratory near Oxford. Early indications are that the fuel can be used in existing internal combustion engined vehicles without engine modification."

"Researchers from the University of California-Davis and Stanford University have published a study that details one scenario to completely convert the world to clean, renewable energy sources – and they say it could be done in 20 to 40 years using technology available today at costs comparable to fossil fuel-based energy.

The two part paper coauthored by Stanford researcher Mark Z. Jacobson and Mark Delucchi, of UC-Davis, evaluates not only the technology required, but also the costs and material requirements for converting the planet to renewable energy sources. Their plan would see the world running predominantly on electricity, with 90 percent of this sourced from wind and solar. The remainder would be made up from geothermal and hydroelectric sources, which would provide around four percent each, while wave and tidal power would contribute the remaining two percent.

To that end, the plan would see all new energy generation coming from wind, water and solar by 2030, and all pre-existing energy production converted by 2050. The researchers say that the millions of lives saved by the reduction in air pollution and a 30 percent reduction in world energy demand – thanks to the conversion of combustion processes to the more efficient electrical and hydrogen fuel cell processes – would help keep the cost of such a conversion down.

'When you actually account for all the costs to society – including medical costs – of the current fuel structure, the costs of our plan are relatively similar to what we have today,' Jacobson said."