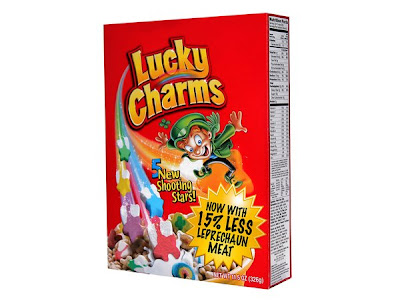 MINNEAPOLIS — Saying that Lucky Charms is "as magically delicious as ever but now lower in magically saturated fats," General Mills announced Friday it would begin making the cereal with 15 percent less leprechaun meat.

"Lucky Charms will still have the same great taste and marshmallowy goodness, but now only the tastiest, leanest parts of the leprechaun will be used," a press release read in part, noting that the Lucky Charms recipe had not changed since 1964, when leprechaun meat was first added as an emulsifier. "As always, we use only natural colorings and flavorings in our cereals, which is why you may still sometimes find a wee hat in your bowl." The announcement comes only weeks after General Mills discontinued the use of ground rhinoceros in Wheaties.
Posted by Robalini at Thursday, September 29, 2011

Hi there this is kind of of off topic but I was wanting to
know if blogs use WYSIWYG editors or if you have to manually code with
HTML. I'm starting a blog soon but have no coding knowledge so I wanted to get guidance from someone with experience. Any help would be greatly appreciated!

Wonderful blog! I found it while browsing on Yahoo News.
Do you have any suggestions on how to get listed in Yahoo News?
I've been trying for a while but I never seem to get there! Cheers

Hi there, I do think your web site may be having browser compatibility
problems. When I look at your site in Safari, it looks fine but when opening in
I.E., it's got some overlapping issues. I just wanted to provide you with a quick heads up! Besides that, fantastic site!

I like what you guys are up too. This type of clever work and exposure!

Keep up the awesome works guys I've included you guys to our blogroll.

This is my first time go to see at here and i am truly happy to read everthing at alone place.

Hi! This is kind of off topic but I need some guidance from an established blog.
Is it tough to set up your own blog? I'm not very techincal but I can figure things out pretty fast. I'm thinking about setting up my own but I'm not sure where to begin. Do you have any points or suggestions? Thanks

Hi there to all, it's actually a nice for me to go to see this website, it contains priceless Information.

Hi to all, the contents existing at this website are really amazing for people knowledge, well, keep up the nice work fellows.

What a material of un-ambiguity and preserveness of valuable know-how
regarding unpredicted feelings.

This is a topic that is near to my heart... Many thanks!
Where are your contact details though?

Here is my webpage ... Like Elle And Malena Making Out

Do you mind if I quote a few of your posts as long as I provide credit and sources back to your weblog?

My blog site is in the very same niche as yours and my visitors would truly benefit from a lot
of the information you provide here. Please let
me know if this okay with you. Thank you!

Fantastic web site. Lots of helpful info here. I'm sending it to a few buddies ans additionally sharing in delicious. And of course, thank you in your effort!

Hi! Do you know if they make any plugins to help with Search
Engine Optimization? I'm trying to get my blog to rank for some targeted keywords but I'm not seeing very good
success. If you know of any please share. Thanks!

These are in fact impressive ideas in on the topic of blogging.

You have touched some nice factors here. Any way keep
up wrinting.

Please let me know if you're looking for a article author for your site. You have some really good articles and I think I would be a good asset. If you ever want to take some of the load off, I'd love to write some articles for your blog in exchange for a link back to
mine. Please send me an email if interested. Kudos!

Hi there exceptional blog! Does running a blog such as this require
a large amount of work? I have very little expertise in coding but I had been hoping to start my own blog in the near future.
Anyhow, if you have any suggestions or tips for new blog owners please share.

I know this is off topic however I just needed to ask. Thank you!

Great items from you, man. I've bear in mind your stuff prior to and you are simply extremely wonderful. I actually like what you've acquired here, certainly
like what you are stating and the way in which wherein you say it.
You make it enjoyable and you still care for to
stay it sensible. I cant wait to read far more from you.
This is actually a terrific site.

Feel free to surf to my web blog :: Email Console

Do you have a spam issue on this blog; I also am a blogger, and I was
wondering your situation; many of us have developed some nice procedures and we are looking to trade solutions with other folks, why not shoot me an email if interested.

Incredible! This blog looks just like my old one!
It's on a totally different topic but it has pretty much the same layout and design. Great choice of colors!

I got this site from my friend who informed me regarding this site
and at the moment this time I am visiting this
web site and reading very informative articles or reviews at this time.

I'm gone to inform my little brother, that he should also pay a visit this web site on regular basis to get updated from latest news update.

I used to be suggested this web site by way of my cousin.

I'm not positive whether this submit is written via him as nobody else recognise such distinct about my difficulty. You're amazing!
Thank you!

Very good info. Lucky me I recently found your site by chance (stumbleupon).
I have saved it for later!

Right now it looks like Wordpress is the
best blogging platform available right now. (from what I've read) Is that what you're using
on your blog?

My web page: click through the up coming web page

I know this if off topic but I'm looking into starting my own weblog and was curious what all is needed to get set up? I'm assuming having a blog
like yours would cost a pretty penny? I'm not very web savvy so I'm not 100% sure.
Any recommendations or advice would be greatly appreciated.
Appreciate it

Here is my weblog :: read what he said

Thanks for sharing your thoughts about goat butter. Regards

Its like you read my mind! You appear to know
a lot about this, such as you wrote the book in it or something.
I think that you just can do with a few p.c. to drive the message house a bit, but other than that, this is wonderful blog.

A fantastic read. I will definitely be back.

Yesterday, while I was at work, my sister stole my iPad and tested to see
if it can survive a thirty foot drop, just so she can be a youtube sensation.
My apple ipad is now broken and she has 83 views. I know this is entirely off topic but I had to share it with someone!


Feel free to visit my homepage; read what he said